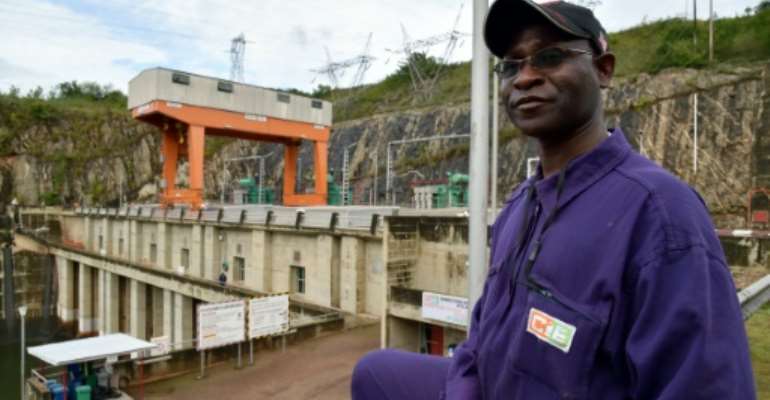 An employee of the Ivorian Electricity Company poses in front of the Kossou dam on September 30, 2014. By Issouf Sanogo (AFP/File)

Abidjan (AFP) - China will provide Ivory Coast with over $800 million (730 million euros) for a major expansion of its electrical grid which would bring power to 500 towns, officials announced Tuesday.

The money is to come in the form of a $778 million loan and a donation of $35 million for the three-year project, said Ivorian Prime Minister Daniel Kablan Duncan at a signing ceremony.

"This makes abundant, high-quality energy accessible to everyone at a lower cost," Duncan said.

Hundreds of millions of Africans live without access to electricity, which analysts see as a significant brake on economic growth and raising standards of living.

The funding, which will include an additional $41 million from Ivory Coast's government, is to pay for installing 1,955 kilometres (1,214 miles) of high-tension lines as well as the electrification of 500 towns.

The project will also build 13 power substations and refurbish 14 existing ones in the west African nation of some 20 million.

China has numerous projects in Ivory Coast including the construction of a 380 million euro hydroelectric dam, with its total active financial commitments topping out at about 1.4 billion euros.

Beijing has positioned itself to become a key trading partner, with bilateral trade jumping 64 percent to 847 million euros between 2010 and 2014.

Ivory Coast aims to massively expand access to electricity, targeting a doubling of output by 2020. President Alassane Ouattara, who was re-elected in October, has pledged to provide electricity country-wide.

National authorities plan to invest $18 billion in the energy sector by 2030, with a large chunk of the money coming from the private sector.

Ivory Coast is a leading economic power in west Africa, but has had to rebuild parts of its grid since the end of its bloody post-electoral crisis in 2010-11 that left some 3,000 people dead.