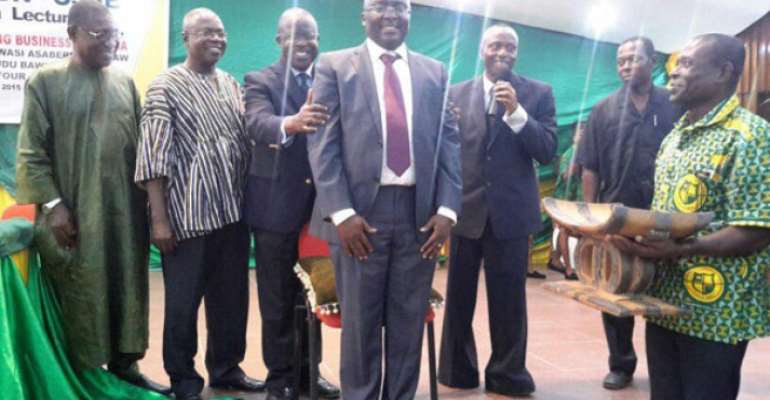 The running mate to the New Patriotic Party (NPP) flag bearer for the 2016 election, Dr Mahamudu Bawumia has challenged government to put price tags on all the projects it had undertaken from 2009 till date which has incurred a debt of over $37 billion within the same period.

He explained that this will afford the Ghanaian tax payer the opportunity to verify value for money and also ascertain the usage of such huge amounts borrowed by the current administration because the real cost of projects to show for was below $5 billion.

Dr Bawumia, a former Deputy Governor of the Bank of Ghana was addressing the 18th Pearson-Osae Appreciation Lectures organized by the Prempeh College Old students Association at the Great Hall of the Kwame Nkrumah University of Science and Technology (KNUST) in Kumasi.

It was on the topic 'Reducing the Cost of Doing Business in Ghana'. The old students also used the occasion to confer an Amanfuo (old student status) on Dr Bawumia.

Dr Bawumia said the increasing resort to single source procurement compromised transparency of the procurement process and also some of the judgment debt paid for no work done could have set up more than two fully capitalized banks to provide support to SMEs.

He explained that failure of the government to go for value for money process in project execution imposed great cost on the country in general resulting in the private sector and individuals intimately being charged the cost of these corrupt practices.

These, he added result in higher utility tariffs, higher taxes, other rates and higher interest rates.

According to Dr Bawumia, the current IMF MD had stated that most of Ghana's borrowing have been for consumption and not investments.

He further explained that over pricing of contracts, corruption and the absence of value for money were partly responsible for these huge loans with nothing substantial to show for.

He called for the establishment of a Value for Money body made up of experts and very experienced persons with proven integrity who would ascertain the value for money of all contracts before they would be entered to or put before Parliament.

Dr Bawumia called for the implementation of what he called 'Automaticity' in the collection and disbursement of taxes into the National Health insurance scheme, the GETFund and the District Assembly Fund.

He said government had collected taxes in the name of these bodies and had refused to pay them to these statutory institutions, resulting in these institutions failing to pay their debtors, especially contractors, thereby leading to high cost of business.

With his suggestion, he explained that immediately the taxes for these statutory collections were done, they should be automatically deducted and placed in the accounts of these statutory entities so that they would be able to defray their debt.

Akufo-Addo to launch ‘Operation Clean Your Frontage’ in Accr...
2 minutes ago

Retract and apologise your derision, disrespect, and condesc...
4 minutes ago