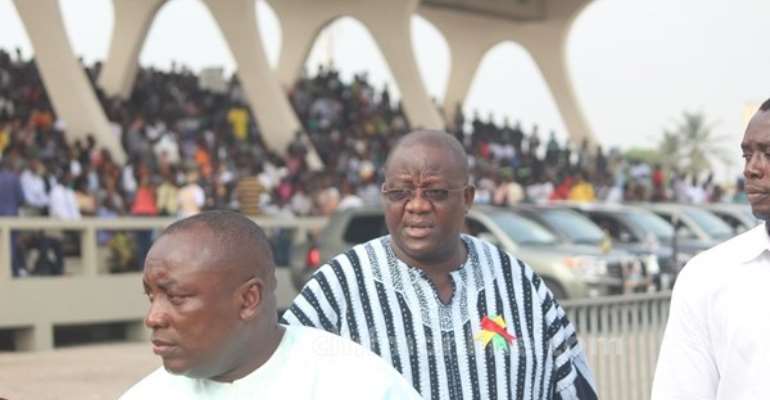 It may have been sheer coincidence, but on the same day that this year’s Nobel Prize Winners were scheduled to receive their awards in Sweden and Norway, for the Peace Prize, the General-Secretary and the Second-Vice Chairman of the New Patriotic Party (NPP) were suspended indefinitely from the country’s largest and most progressive political party.

This may be a sign of good things to come. The proverbial handwriting had been on the wall for quite some time now.

I don’t drink and so it is quite obvious that I will not be popping champagne. At any rate, I just finished devouring a considerable portion of rice dumpling (omotuo) and a thick bowl of peanut-butter, or groundnut, soup, as the latter is widely known in Ghana.

I am also deeply pained by the legion of issues leading up to the indefinite suspensions of Messrs. Kwabena Agyei Agyepong and Sammy Crabbe to really feel any inclination towards jubilation, for I feel that too much time has been wasted in getting the right things done at party headquarters.

The two insufferably insolent former New Patriotic Party executives now join their former boss and indefinitely suspended NPP National Chairman Paul A Afoko. And to be certain, this is all well and good; for the two men had long indicated that they felt themselves to be far more important than the entire executive leadership of the party.

For me, personally, though, what was even more curiously disturbing was the publicly avowed decision by the two men not to respect the decision of the National Council (NC) and the party’s National Executive Committee (NEC) to suspend Mr. Afoko indefinitely.

And yet Messrs. Agyepong and Crabbe had ironically claimed that they had been delegated by mandate to ensure the resounding electoral success of Nana Addo Dankwa Akufo-Addo, the 2016 NPP Presidential Candidate, which they studiously intended to carry out.

Now they have been exposed for the inexcusable liars that they have been widely known to be since the very first day when they set foot on the threshold of the Elephant Party’s Asylum Down national headquarters.

One begins to wonder whether there is some sort of miasma or stench of a baleful air in the vicinity of the Asylum Down headquarters of the New Patriotic Party that caused the “Three Musketeers” to lose their minds and their bearings. Indeed, what makes the indefinite suspension of the three top administrators at party headquarters rather refreshing is the fact that, even as Dr. Richard Amoako-Baah poignantly put it, now the New Patriotic Party will be heading into the New Year and Election 2016 with a united front (See “Suspending K. Agyepong, Crabbe Lesser of Two Evils – Amoako-Baah” MyJoyOnline.com / Ghanaweb.com 12/10/15).

The NPP leadership may now be able to concentrate on vigorously promoting the progressive and field-tested and practically proven socioeconomic, political and cultural agenda of the Danquah-Busia-Dombo Tradition.

Indeed, it would have been even more constructive, and conclusive, if the NPP-NEC and the NC had outright expelled Messrs. Afoko, Agyepong and Crabbe from the party, so as to avoid being unnecessarily and unproductively drawn into the sort of distractive legal battles that Mr. Afoko seems so hell-bent on engaging the energies of party stalwarts in.

On the other hand, there are, of course, those among the top-echelon membership of the party who would have envisaged such a move as an overkill. I personally don’t see any viable future for the “Three Musketeers” within the New Patriotic Party.

But in the ineluctably labile and mercurial terrain of political praxis, one day can bring about a sea change in cast of characters at the helm of affairs.