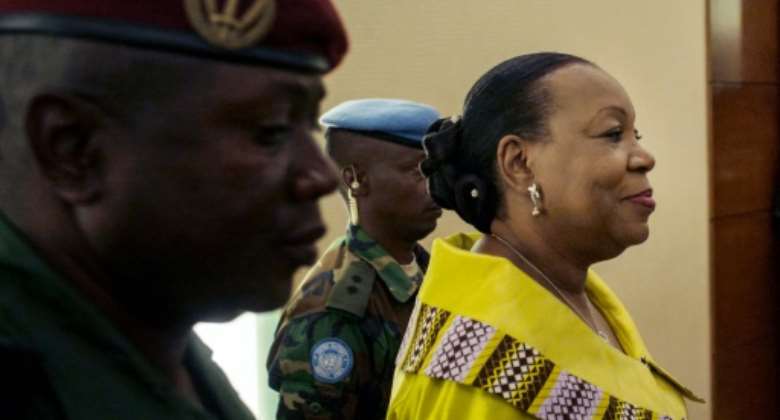 Central African Republic transitional President Catherine Samba Panza (R) arrives at a hotel in Bangui on December 9, 2015, as presidential candidates gather to sign a code of conduct agreed for elections to be held on December 27. By Marco Longari (AFP)

The referendum was seen as a test run for the much-delayed elections set for Sunday aimed at ending more than two years of sectarian conflict.

The new basic law will usher in the sixth republic since independence from France in 1960 and mark the 13th political regime in a country notorious for its chronic instability.

The poor former French colony is trying to get back on its feet since being plunged into conflict after a mainly Muslim rebellion overthrew longtime Christian leader Francois Bozize in 2013.

Violence marred the December 13-14 balloting, with five people killed and 20 injured in an attack in the flashpoint Muslim-majority PK-5 district of Bangui.

Hundreds of people headed to the UN peacekeeping headquarters last Wednesday to demand the expulsion of the "enemies of peace" in PK-5.

Almost two million Central Africans had registered to vote in a population of 4.8 million, a clear sign of a widespread desire to return to a life of peace and normalcy.

But turnout was only 38 percent, said Marie Madeleine N'kouet Hoornaert, president of the National Elections Authority.

Many of the 5,600 polling stations were located in remote areas accessible only by dirt roads. And of the 460,000 people displaced by the unrest living in camps across Central African Republic's borders -- many of them Muslims -- only 26 percent had been able to register.

Results for the capital Bangui were known December 17, with 90 percent in favour and a turnout of 30 percent.

The violence has been attributed to a faction of the Muslim ex-Seleka rebellion that overthrew Bozize.

A second day of voting was held in the PK-5 district under the protection of UN peacekeepers and French soldiers.

Unrest has forced the country to postpone elections repeatedly despite intense international pressure to hold them.

The ballot came two weeks after Pope Francis paid a high-profile visit to Bangui and appealed to Muslims and Christians to live as "brothers and sisters".