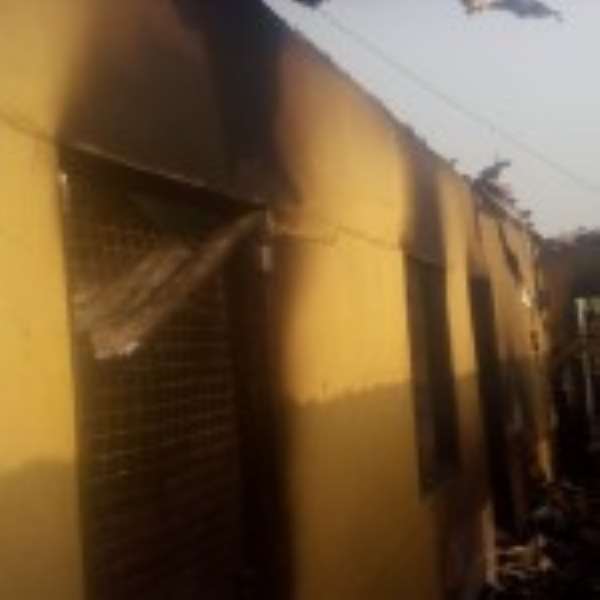 A seven-bedroom house at Akyem–Nsutam near Bunso Junction Roundabout in the Eastern Region, which was being occupied by 15 persons, was gutted by fire on Sunday at about 6.30 am.

DAILY GUIDE gathered that the power interruption started the fire in one of the rooms, which spread quickly to other parts of the house.

Rev. Osafo Botwe, who spoke to DAILY GUIDE, hinted that he saw the fire outside and quickly raised alarm, adding that when neighbours and personnel of the Ghana National Fire Service (GNFS) from Anyinam and Kyebi got to the scene, all the rooms had been gutted.

The landlord noted that his wife and children escaped unhurt, noting that other tenants also managed to run from their rooms, but failed to pick any item from the room.

Mrs Osafo, wife of the landlord, who is a second-hand cloth seller, on her part, said “I was in the bathroom bathing when my husband shouted that there was fire so I quickly came out with my children. Before we realized the house was on fire…I went for loan of GH¢180.000 just last week to buy some clothes and sell them this Christmas, but the money, my wedding ring and belongings of my family all got burnt.”

The Anyiman Sub–station manager of Ghana National Fire Service (GNFS), Assistant Station Officer, Simeon Amponsah, who was at the scene, told DAILY GUIDE in an interview that he received a phone call and rushed to the scene on Sunday at 7 am.

ASO Amponsah hinted that his outfit cannot immediately determine the cause of the fire, saying an electrical fault might have caused the fire.

The landlord and the tenants have passionately appealed to the National Disaster Management Organization (NADMO) and the general public to come to their aid since they are currently homeless.