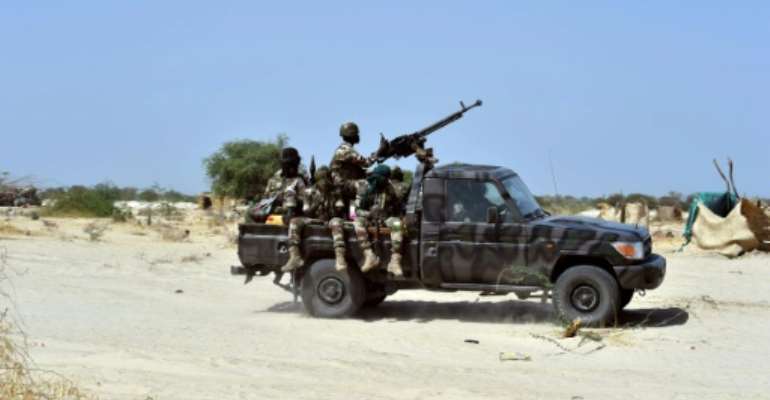 Niger soldiers ride in a military vehicle on May 25, 2015 in Malam Fatori. By Issouf Sanogo (AFP/File)

Niamey (AFP) - Niger's interior minister on Saturday said nine military officers had been arrested on suspicion of planning a coup and would face a military tribunal, after the opposition challenged the government to provide proof of the plot.

He said the coup had been foiled "thanks to the loyalty" of certain soldiers "who regularly kept us informed of the plan's progress".

The alleged coup was scheduled for December 18, when President Mahamadou Issoufou was set to return to the capital after attending independence day celebrations elsewhere in the country, the minister said.

The tensions come just weeks before the west African nation holds presidential and parliamentary elections, in which 63-year-old President Mahamadou Issoufou is seeking a second term.

During a televised address to the nation on Thursday, the president said the coup had been foiled and that most of the main suspects had been detained.

But the opposition was quick to rubbish the claim. Amadou Boubacar Cisse, who is running against Issoufou in the February 21 polls, said Issoufou had provided "no proof" and accused the government of seeking to manipulate the political climate ahead of the elections.

Interior Minister Massaoudou insisted the authorities had "sufficient evidence" of the plot including "text messages and correspondence" between the suspects.

"The inquiry is only at the beginning and has been entrusted to the gendarmerie as part of a procedure before a military tribunal and the trial will follow," he said.

He added that there was no indication that any civilians were implicated in the plot.

He said among those arrested were air force General Souleymane Salou; Lieutenant Colonel Idi Abdou Dan Haoua, commander of the air force base in the capital Niamey; and Nare Maidoka, head of the 1st Artillery Battalion in the western town of Tillaberi; as well as two senior officers with elite anti-terror units.

One second lieutenant, who had been on the run, handed himself in to the gendarmes, according to Massaoudou.