Let's put the past aside; this is our time; Akufo-Addo tells NPP delegates, supporters 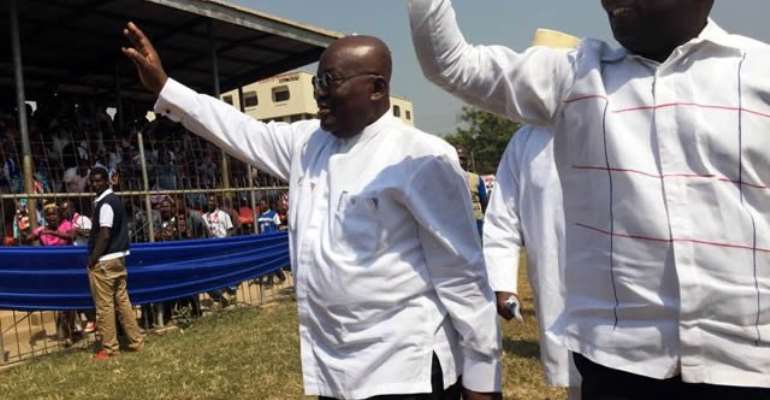 New Patriotic Party (NPP) flagbearer, Nana Addo Dankwa Akufo-Addo, has appealed to thousands of party delegates and supporters at a special conference in Sunyani to put aside their differences and work together for victory in the 2016 polls.

“The time has come to win the 2016 elections. It is time to set to work,” the NPP flagbearer urged.

The NPP has been holding an Extraordinary Delegates' Conference Saturday in the Brong Ahafo Regional capital, Sunyani, where party stalwarts and executives have been speaking on the theme “Arise for Change 2016”.

“We have spent our energy fighting each other instead of the NDC”, Akufo-Addo said, referring to bitter and sometimes fatal infighting between factions in the opposition party.

The infighting reached its peak after party General Secretary, Kwabena Agyepong and National Chairman, Paul Afoko, as well as 2nd Vice-Chairman, Sammy Crabbe, were singled out as consistently causing trouble in the party.

The party’s National Executive Committee has since suspended the three executives, upon recommendations by the National Disciplinary Committee to that effect.

Nana Akufo-Addo said the events that led to the indefinite suspension of the three executives have been a “traumatic experience” for him, adding he wished a less painful process existed and was used to deal with the people.

However, Akufo-Addo said he is encouraged by the knowledge that the process that the party used to suspend the national executives were above board and within the frameworks of the party’s constitution.

“Our party structures are working,” he notes.

He told thousands of jubilant party supporters and delegates at the Coronation Park that “Ghanaians are looking up to the NPP to win elections in 2016” – urging them to ensure that that expectation becomes a reality.

“The campaign is the responsibility of all of us. This campaign is for all NPP members,” he urged.

The NPP flagbearer said he was willing to work with everybody committed to ensuring that the party unseats the governing NDC in 2016.

Akufo-Addo to launch ‘Operation Clean Your Frontage’ in Accr...
3 minutes ago

Retract and apologise your derision, disrespect, and condesc...
5 minutes ago