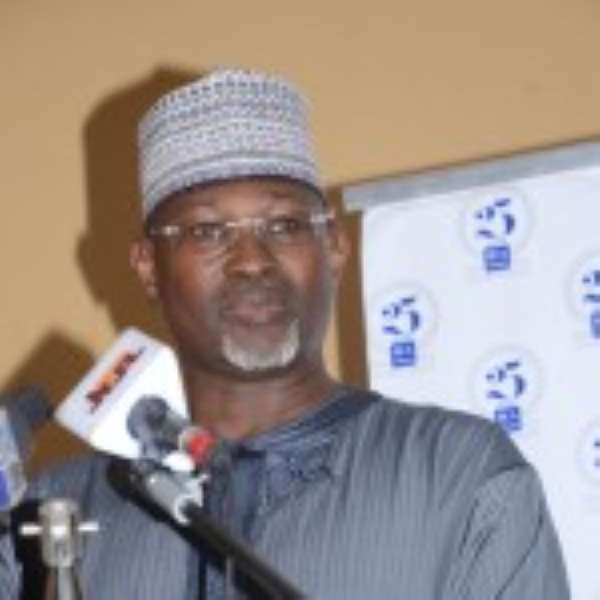 most populous and diverse country. It was the national task of giving a

new direction and efficiency to the Independent National Electoral Commission (INEC), which he did, if you like, stylishly.

Now a continental political star, Ghana’s Institute of Economic Affairs (IEA) has shared in the glory now associated with his image by inviting him to come and deliver eye-opening presentations about how he organised the most credible polls in Nigeria’s, if not Africa’s, history.

The think-tank could not have offered Ghana a better deal to strengthen her democracy than bring such a personality to come and present the details of how he went about reorganising the INEC and injecting it with the impetus to churn out a relatively successful election. By the time he finished his delivery, there was a spontaneous satisfaction among his perfect mix of the Ghanaian society assembled at the giant size auditorium of the College of Surgeons and Physicians in Accra.

For Africa’s most populous and complex country, UN Secretary General Ban Ki Moon did not err when he remarked, and which Jega quoted, “when you change Nigeria you also change Africa”.

Only time will tell though whether the changed election pattern in Nigeria would be replicated in other parts of the continent where badly managed elections have resulted in avoidable spates of bloodletting.

The controversy which greeted the arrival of the Prof added to the publicity which characterised his presentations in both Accra and Kumasi. One of the principal stakeholders to benefit from such a delivery through an analytical comparative analysis is doubtlessly the Electoral Commission (EC) but whose newly appointed Chairman, Charlotte Osei, declined the invitation because she was billed to travel outside the country. Another excuse was that her staff were busy with the then pending Amenfi West by-election.

In her radio interview, Mrs Jean Mensa stated that the EC had been informed earlier about the pending visit of Prof Jega as protocol demands, as she put it. The EC, she explained, however stated that they would be busy with the by-election as pointed out; and besides, Charlotte was billed to travel outside the country.

For those who did not follow the interesting side attraction to the visit of Prof Jega, they had a feel of it when Dr Audrey Gadzekpo asked during the question and answer segment of the presentation whether the visitor had met with the EC.

Prof Jega would have rather the question was not posed at all as he tried to parry it to no avail when it resurfaced. Eventually he gave it a dose of diplomacy when he said that there was nothing wrong with his inability to meet the EC because, as he put it, not all items in a programme get carried out.

The auditorium held an assembly of important personalities from the economic, political and civil society community and even diplomats, which underscores the importance of the subject under review. The New Patriotic Party (NPP) 2016 flagbearer, we gathered, had to rush from Asankragua where his party was campaigning ahead of a by-election which was held last Tuesday.

Nigeria’s Past
Prof Jega put the Nigerian situation in context by tracing the past bad polls and how these impacted negatively on the country and for that matter its stability.

“This presentation attempts to bring out lessons from the Nigerian experience of 2015 general elections, as a contribution to the discussion on the viability of credible elections and their relationship to democratic consolidation in Africa; and indeed, towards free and fair elections in Africa,” he said.

The Journey
What therefore became the novelties in the last elections can be attributed to the recommendations from the consultants, before which was an independent review body whose input went far in shaping the INEC, it became clear in his presentation. In his own words, “perhaps two of the most important recommendations of the independent review of the RERC that impacted on the work of the Commission were first, the need to restructure the Commission to strengthen professionalism of staff and, second, the institutionalisation of a planning culture well ahead of elections. On restructuring, the Commission engaged the management consultancy firm, PricewaterhouseCoopers (PwC), to conduct an evaluation and advise the Commission. The PwC report informed the far reaching restructuring and reorganisation of the Commission between 2012 and 2013.”

Prof Jega said for him to achieve the dream of a paradigm shift, the need to reorientate staff of INEC could not be overlooked. The workers were told about the need for commitment in the new direction under him. Officials were no longer engaged in the actual management of the polls on the field and their numbers largely reduced as part of the new deal. National Service personnel, who in Nigeria are called youth Corpers, were engaged alongside persons from academia. That was how come Ghanaians witnessed Professors and other tertiary institution teachers playing roles of returning officers and the like. The lessons from previous elections, especially the immediate past, impacted on the learning process which Prof Jega embraced sufficiently for his game changing exercise as captured in these words. “In terms of learning, we spent a lot of time trying to learn from our 2011 experiences. That learning process has three main dimensions; first we reviewed our experiences of the 2011 general elections; second, we then used our findings to reform both the organisation and the infrastructure for conducting elections; and third, the review and reforms informed our specific planning for the 2015 elections. Immediately after the 2011 elections, starting from June 2011, the Commission began a comprehensive review of the conduct of the 2011 general elections.”

Retreats
In his bid to tap more knowledge from others in the election management industry if you like, Prof Jega engaged several personalities including Ghana’s Dr Kwadwo Afari-Gyan to tap their experience. It was an engagement which perhaps exposed him further to the challenges of election management in Africa. He had charitable words for the former Chairman of Ghana’s Electoral Commission who he said in spite of the challenges of the last elections in Ghana by and large performed well. It was during one of such retreats that the overwhelming shortcomings of the voters’ register were unearthed and which as he put it informed the decision to replace it. The integrity of an election, he noted, is dependent upon the quality of a voters’ register. Within three weeks, and using an expensive locally produced software, 73 million Nigerians were registered, followed by a massive and effective cleanup which dropped some four million ineligible persons from the list. “This review was in three parts: a) Internal retreats with different groups of INEC staff – electoral officials, administrative secretaries and Resident Electoral Commissioners. b) Debriefing retreats and meetings with major stakeholders and partners, particularly political parties, the media, civil society organisations, security agencies under the Interagency Consultative Committee on Election Security (ICCES) and development partners. c) The Registration and Election Review Committee (RERC), which is a panel of independent experts who are not directly connected to the Commission, consisting of academics, civil society leaders and media practitioners. The Commission asked them to conduct an independent review of the conduct of registration of voters and the elections proper. Some of the major recommendations of these reviews include: Strengthening of the system of recruiting ad hoc staff; streamlining the involvement of permanent INEC staff in election management; addressing the challenge of funding; improving the training of staff; restructuring the Commission and optimising the use of the skills and capacities of staff; improving inter-departmental collaboration; creation of a strategy and policy department or unit; improving communication with the public,” he said.

Paradigm Shift
The numbers constituting the staff strength of INEC was one of the moves taken to ensure a new phase in managing elections in Nigeria. Permanent staff and civil servants were sidelined in the actual field work.

Justice Emile Short in a chat with Attahiru Jega

Do-Or-Die Mentality
The Do-Or-Die approach to politics, he noted, accounted for the heightened tension in elections in Africa’s most populous nation. Ballot box snatching and myriad challenges characterise elections in Nigeria. It is a comparison of the level of such shortcomings with previous polls, which among others were used to measure the success or otherwise of the recent polls in Nigeria.

Permanent ID Card
The introduction of the permanent ID card went a long way in stopping those who were not qualified from doing so. These smart cards were imbedded with a special feature which made it possible for ineligible persons to be fished out at the last minute and therefore prevented from voting, Prof Jega said.

Success
At the end of the day when the overall picture was presented to Nigerians and the rest of the world, those who had come to the country to observe what they predicted to be a chaotic exercise were amazed at the success chalked. The idea, according to Prof Jega, was to ensure a high degree of integrity in the election management to restore confidence. In his presentation, he summed this success thus: “Despite the highly polarised political environment and the complex electoral terrain, the 2015 general elections resulted in the country’s first peaceful democratic transfer of power. An incumbent party that has held power for 16 years lost the election to an opposition party and the incumbent president conceded defeat.”

Communication Strategy
An innovation was made in the management of communication, he said, which according to him enabled the INEC to churn out important information which was needed to build trust and confidence. A situation room coordinated all such information, offering responses to areas where challenges reared their heads, he explained.

Peter Mac Manu asking question after the the delivery

Security
Security management is an important segment of elections. There is need therefore for the Commission to engage with security personnel and when they express fear about the timing of an election, so must be taken into consideration. He explained that it was under such circumstances that the election date had to be postponed earlier because not listening to the admonitions of security personnel can be detrimental to the overall success of an election. “The elections were initially scheduled for February 14 and 28 for the national and state levels respectively, but were rescheduled because of concerns by security agencies regarding the counterinsurgency operations in some North-Eastern States at the time, which they believed would affect their capacity to provide adequate security for the elections. After wide consultations, the Commission acceded to the request of the security agencies and rescheduled the polls by six weeks,” he said to buttress the importance of security in elections especially under the peculiar Nigerian circumstances. Prof Jega received a deserved standing ovation when the question and answer segment had to be ended by the MC, even when it was evident the audience had more questions.