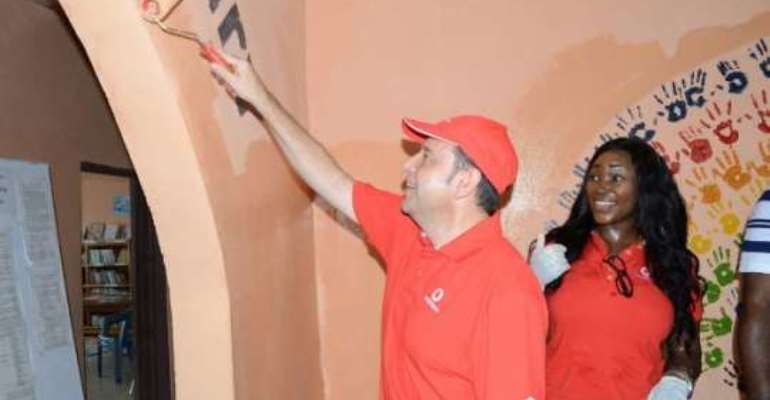 A statement signed by Nana Yaa Ofori-Koree, Head of the Foundation, and copied to the GNA, explained that Employees of the telecommunications company receive financial support annually from the Vodafone Ghana Foundation to start and sustain various meaningful and impactful initiatives they feel passionate about; particularly in the areas of health and education.

She said the 'Vodafone Healthline, Healthline 255, Healthfest, Mobile 4 Good, Bring a Cheer, Vodafone Scholars are among the ground breaking and impressive initiatives of the Vodafone Foundation.

'In the area of EVP, the tighter schedules of our employees do not prevent them from investing time, money and energy in making sure the specific needs of a given community are met', she said.

The statement noted that the telecom operator's Senior Management Team led by Mr Harris Broumidis, Chief Executive Officer, renovated the Senchi Community Library building and compound, donated reading materials to the school and organised an educational 'fun and learn fair' programme for the children in the community.

It said in partnership with Joy FM, Vodafone's employees built an ultra-modern library for the Asofan cluster of schools, near Ofankor in the Ga West Municipality of the Greater Accra Region.

About mentorship and training programmes, Vodafone employees have embarked on a series of ICT training sessions where students of the New Horizon Special School at Dzorwulu who disabilities such as spastic, cerebral palsy and autism, were taught Information Technology within two weeks to enhance their skills.

In emphasising the need for corporate Ghana to concentrate on universal education for all children, Vodafone employees partnered Special Attention Project (SAP), a local NGO that provides educational support for out- of-school children with Specific Learning Disabilities (SpLD), to provide support to school drop-outs who live independently on the streets and show signs of SpLD.

On health, the Foundation donated 10 incubators to the Intensive Care Unit (ICU) at the Tamale Teaching Hospital and one to the Nsawam Hospital to equip the neonatal department to give many premature babies a greater chance of survival.

'Aside the £100,000 package the Foundation used in supporting victims of the June 3 floods and fire incidents in Ghana, employees of the telecom operator held a blood donation exercise at Vodafone headquarters where other companies within the Airport City enclave took part in raising additional pints of blood to support the National Blood Bank'

The statement also stressed that Vodafone staff contributed immensely in creating awareness and educating communities about cleft and Operation Smile - a medical mission which provides free reconstructive surgery to people living with cleft lips and palates.

The awareness campaign was done through radio interviews, developing and distributing publicity materials and actively involving other staff to recruit candidates for cleft lip and palate operations. This contributed to over 400 patient evaluations and 90 surgeries performed at the Cape Coast Teaching Hospital in April 2015.

No ‘aboboyaa’ allowed on Accra highways from November 1 — He...
55 minutes ago