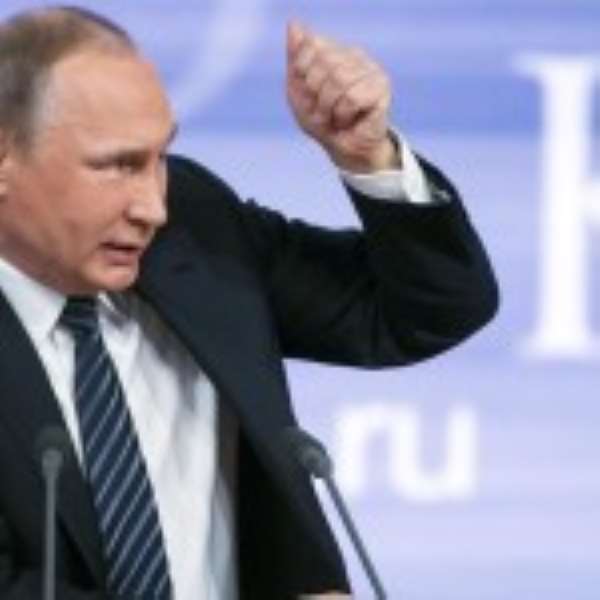 Donald Trump has said that he would “get along very well” with Russian President Vladimir Putin.

The feeling is apparently mutual.
Putin offered high praise for the billionaire businessman-turned-Republican presidential front-runner on Thursday during an annual news conference with reporters.

And in remarks closely mirroring Trump’s assessment of the campaign, the Russian leader called Trump “the absolute leader of the presidential race,” according to the Russian TASS news agency .

While most Republican presidential contenders have demonized the Russian president — including calling him a “gangster” and a “thug” — and pushed plans to isolate Russia on the world stage, Trump has instead touted his ability to improve Washington-Moscow relations by working with the iron-fisted Russian leader.

Trump has repeatedly touted his joint appearance with Putin on an episode of CBS’s “60 Minutes” this fall, referring to himself and Putin as “stablemates.”

Trump said in October that he and Putin “are very different” but suggested that the two men could move beyond the frigid relations that have come to define U.S.-Russia relations under President Barack Obama.

“I think that I would at the same time get along very well with him. He does not like Obama at all. He doesn’t respect Obama at all. And I’m sure that Obama doesn’t like him very much,” Trump said then. “But I think that I would probably get along with him very well. And I don’t think you’d be having the kind of problems that you’re having right now.”

Putin referenced Trump’s reported desire “to reach another, deeper level of relations” with Russia in his remarks Thursday.

“What else can we do but to welcome it? Certainly, we welcome it,” Putin said.

While fellow Republican contenders have been highly skeptical of stepped up Russian military involvement in Syria, Trump has welcomed it.

Trump suggested in the his September “60 Minutes” appearance that the U.S. should avoid deepening its involvement in Syria, instead allowing Russia to take a leading role in combating the radical Islamist group that has called for attacks on the U.S.

Beyond a common desire for a lighter U.S. footprint in Syria, Putin and Trump also share a similar style.

The two men are both well known for their blunt manner and bravado.

Trump often attacks his opponents for being “low-energy” or lacking the “strength and stamina” to be president, touting instead the need for a “strong” leader like himself.

Putin, a former KGB spy and avid outdoorsman, has staked his reputation on his macho image, with his press shop even releasing a photo of the Russian leader topless on horseback.