C.Africa voters flock to elect leaders in push for peace

By Jean-Pierre Campagne with Christian Panika 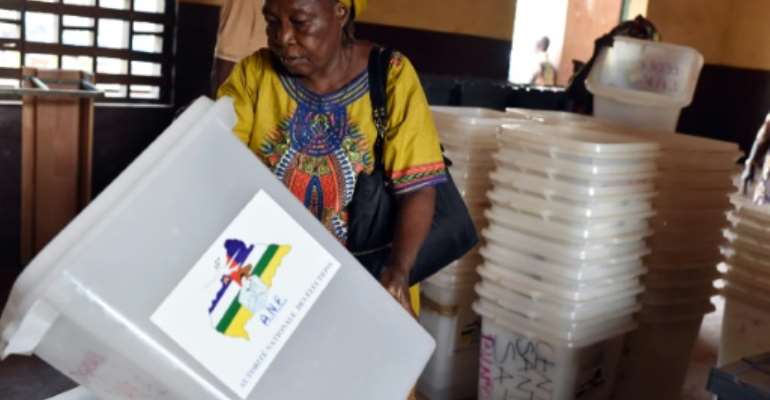 An election worker checks ballot boxes at a polling station in Bangui on December 29, 2015 on the eve of the Central African Republic's presidential and legislative elections. By Issouf Sanogo (AFP)

Snaking queues had formed outside polling stations in the capital Bangui by the scheduled start of the election at 0600 GMT but in many places the start of voting was delayed for a few hours by logistical glitches.

Among the areas affected by the delays was the flashpoint PK-5 district, a Muslim enclave where five people were killed during voting in a referendum on December 13.

Security was tight, with UN troops patrolling the neighbourhood which has been a focal point in clashes between rebels from the Muslim minority and Christian militia, but the enthusiasm of voters was undimmed.

"I vote because I'm patriotic. To rebuild the country, the hospitals and schools," Ousmann, a 27-year-old resident told AFP.

His sentiments were echoed by Philippe Bodo, who voted across town in the second arrondissement, or district.

"We have to change the destiny of the country. But this time the will of the people must not be hijacked," he said.

Three men are seen as front-runners in a race with 30 presidential candidates. All three are experienced politicians who have held senior government posts. One is Muslim.

The elections were delayed several times, mainly for security reasons.

The last postponement, from Sunday to Wednesday, was ordered over delays in distributing ballot papers and voters' cards and in training election officers. Some polling stations in Bangui had yet to receive voters' rolls Wednesday morning.

Christians and Muslims alike came forward on a massive scale to ensure their names were on the roll and collect their voters' cards, many saying they never again wanted to hear gunfire or other manifestations of violence.

This month's referendum on a new constitution was seen as a test run for the election. Over 90 percent backed the new charter which limits presidential mandates to two terms among other reforms.

Calling for a peaceful vote on Tuesday UN chief Ban Ki-moon said the fact that two million people had signed up to take part was a "clear demonstration of the population's engagement to exercise their democratic franchise."

Some 11,000 UN and French peacekeepers are helping to protect the polls.

Mineral-rich but dirt-poor Central African Republic has been rocked by violence since long-serving president Francois Bozize was ousted in March 2013 by a mainly Muslim rebel alliance, the Seleka, which installed Michel Djotodia, the first Muslim head of state of a mostly Christian country.

Djotodia quit in January 2014 after disbanding the Seleka, but attacks on Christians by rogue Muslim forces led to brutal reprisals against Muslim districts by "anti-balaka" ("anti-machete") militias from Christian communities.

Thousands were slaughtered in a spiral of atrocities that drove about one in 10 in the former French colony of 4.8 million to flee their homes.

Despite the presence of the UN and French peacekeepers, large chunks of the country remain out of bounds, either under the control of rebel chieftains or bandits.

At least 1,800 people are running for a place in the 105-seat National Assembly, but by the weekend, the National Elections Authority (ANE) had not cleared a final slate of candidates.

Two of the three men leading the presidential race were prime ministers under late president Ange-Felix Patasse: Anicet Georges Dologuele and Martin Ziguele, who are both Christian.

The third, Abdoul Karim Meckassoua, is a Muslim. He served Bozize from 2003-13 in successive posts, including as foreign minister.

Casting his ballot in Bangui, Dologuele hailed the "great enthusiasm" of voters. "This election is important in ending the suffering of people in Central Africans," he said.

Ziguele called the election a chance "to take back control of our country's destiny."

Meckassoua put the organisational difficulties into perspective, saying that though "not everything is perfect" he was hopeful the glitches would "not taint the outcome."

The three last presidents were barred from standing again: former Bangui mayor Catherine Samba Panza, who has overseen a political transition, as well as Bozize and Djotodia.

Bozize and Djotodia are both in exile and under UN and US sanctions linked to the recent violence.

The counting of the election results is expected to take several days. The presidential vote is expected to go to a run-off between the two poll toppers on January 31.