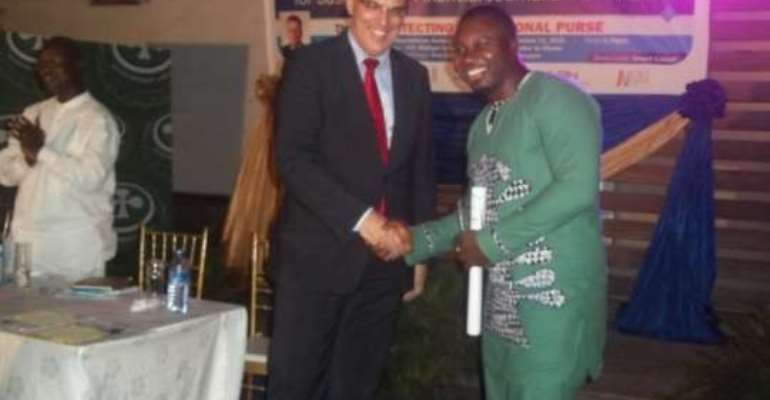 Speaking on the theme, 'Protecting the Public Purse' Mrs Mona Quartey, Deputy Minister of Finance and Economic Planning, charged all media practitioners to be accurate in their reportage about Ghana and not to dent the image of the country.

She, however, indicated that there was now a new public financial management law that would come out soon which seeks to bring together many of the corruption laws including Public Procurement Act 2003 (Act 663), Financial Administration Act 2003 (Act 654), Internal Audit Agency Act 2003, (Act 658) among others.

She said the Ministry has decrease expenditure without compromising the quality of the service that the public service must give.

Mr Lloyd Evans, the President of the Institute of Financial and Economic Journalists (IFEJ), said the theme for this year's award was carefully considered and chosen based on the high level of wastage that seems to have taken a better part of our national resources.

'As a nation we should have value for every cedi that we spend and this calls for prudent financial management in all facets of our national economy be it in public procurement, negotiation of contracts signing, funding and provision of public projects,' he said.

Mr Evans noted that protecting the national purse is one of the greatest governance challenges we have as a nation, and good governance means having good financial governance by proper accountability in the public sector.

He said the media have to play the lead role in demanding accountability from the government.

''In countries that have made it, the media have made it impossible for the government to misbehave but we can only take responsibility if the media itself becomes responsible,' he added.

The Special Prize Award was won by three members whose reports and stories about the extractive industry have been consistent between 2014 and 2015.

In the Competitive award, Best Finance Feature Award was won by Mr Felix Dela Klutse of Business Day with the story title ''Should Couple have a joint bank account''.

Mr Domfeh expressed his gratitude to God for the success and urged all media practitioners to have interest in reporting on climate change.