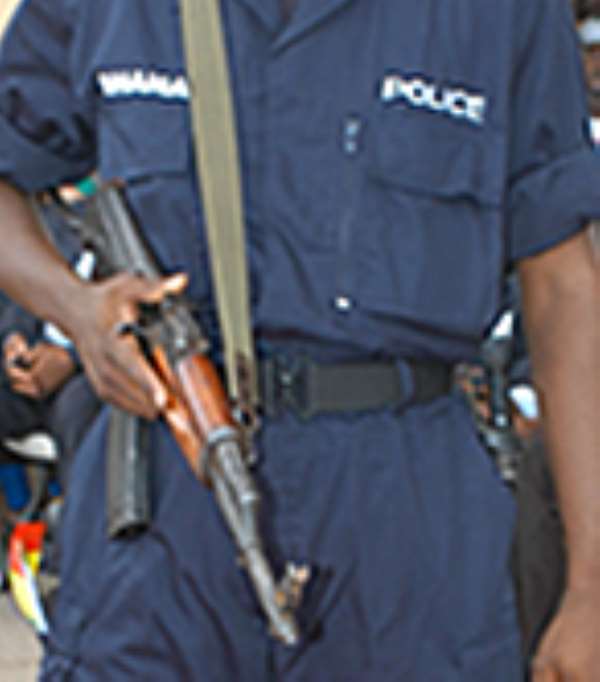 One would ordinarily think that arresting and dealing ruthlessly with gun-wielding land guards across the country by police officers to curb its attendant effects which are threatening human lives would be applauded by top police officers but that is strangely not the case in the Greater Accra Region.

Our investigations at the police headquarters have also revealed that the open support of the criminal activities of some land guards by these top officers is fasting creating tension among the rank and file of the police service.

Some top officers, according to our investigations who are supporting that, the police administration must take stringent measures to stop the land guards and fake land sellers whose activities are causing loss of lives and destruction of properties in parts of the capital are in a blow-to-blow fight with other top officers who are against the move openly.

Threatening text messages and phones calls by these top officers warning other officers to desist from arresting and prosecuting of some land guards which were intercepted by this paper after the Adenta police command had declared war on land guards terrorizing rightful owners of their parcel of lands indicate that the Acting Inspector General of the Ghana Police Service has a lot of work at hand in dealing with the land guard menace in the country.

A senior police officer who spoke to this paper in condition of anonymity at the police headquarters in Accra said the issue is fast dividing the police service and call on the Acting IGP, Mr John Kudalor to intervene and bring sanity to police service.

According to him, it is the duty of the police service to take the fight against land guards to a different level by deploying more personnel to land guard-prone areas and not to rather condone connive with such criminals to disturb the peace of the nation.

Furthermore, he cautioned Police officials particularly, those who condone and connive with land guards to terrorize innocent citizens and rightful land owners to desist from such or they will be reported to the police council for the appropriate actions.

“Some of them (referring to the top Police officers) are given land free for their illegal services. Land guards can do anything in the bush, hoping that when they get to the police station they would be freed. This I know would be very tedious for the police operation against land guards. Our Acting IGP must try his possible best to weed out these corrupt Police officials who have the penchant of getting rich quick thereby putting the name of the Police into disrepute,” he observed.

He said the Police must always investigate cases involving lands which are sold illegally as a step to reduce the practice where lands are sold to multiple customers.

He added that it is rather unfortunate that some Police officers collaborate with land guards to cease lands which have been acquired legally by Ghanaians adding that that such elements within the police administration be exposed soon and be made to face the law.

“The Acting IGP, must come up with a policy and I hope the Mr Kudalor, whom I may describe as a man of justice will not allow material things to derail his efforts in dealing with land guards. The police must act with discipline and high level of professionalism that has characterized the institution over the years, and moreover serve the people and not to be served”, he said.

Speaking to one Estate Developer over the issue, Mr Adu King who has a parcel of land at Apolonia, he emotionally warned of a possible anarchy if the police renege on their duty to protect citizens within the community.

He maintained that the citizens would be compelled to arm and defend themselves if the police fail to bring these regular perpetrators of crime to book.

“If the police fail in their duty to protect the citizenry, the citizens will be forced to protect themselves; this will obviously lead to anarchy and chaos. It is therefore imperative that the police demonstrate commitment to the protection of life and property in the community,” he opined.

He further called on authorities to nip in the bud these acts land guards in the region that he said threaten life, peace and security, especially how they came by the government official weapons such as the AK 47 assault rifles.