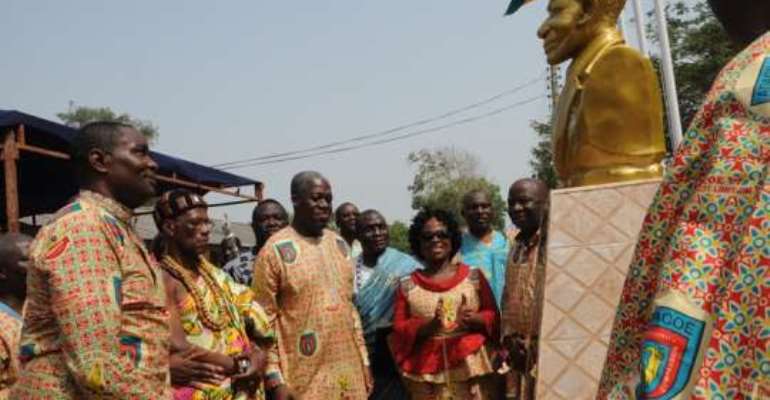 Ada Foh (G/R) Dec.14 GNA - Vice President Kwesi Amissah-Arthur has explained that government's decision to replace the teacher-trainee allowances with the student loans scheme for Colleges of Education was to increase access and improve quality.

He said currently over 4,100 teacher trainees had applied for the students loan, and were receiving like their colleagues in the universities and the polytechnics.

Vice President Amissah-Arthur gave the explanation when he attended the 50th Anniversary Celebration of the Ada College of Education (ADACOE) at Ada Foh in the Greater-Accra Region.

The anniversary was on the theme: 'Growing Our Teachers, Building Our Nation; A Concern For All.'

Vice President Amissah-Arthur also stated that with the passage of the Colleges of Education Act 847, Teacher Training Colleges were ungraded to tertiary status.

He said to enable the new reforms function effectively, a number of legal and structural reforms were undertaken.

He clarified that government did not merely remove the allowances, but made the arrangement that permitted teacher trainees to access the students' loan which hitherto was available to only university and polytechnic students.

Vice President Amissah-Arthur also stated that the replacement of the allowances with the students' loans enrollment in the 42 Colleges of Education had increased by 64 percent, adding that the government was increasing access, given the policy change.

He said without the reforms more than 60 percent of the students representing 9,000 teacher trainees would not have had the opportunity to be admitted into the Colleges of Education.

'When conditions change, you must change to be able to meet the challenges,' he added.

Vice President Amissah-Arthur further stated that government continued to provide the feeding of all teacher trainees three times a day, and to also maintain the policy of automatic employment for them after graduation.

He stated that the government was committed to investing in education to produce the needed human resources for national development.

He said the policy decisions and intervention government had made, aimed at increasing access and improving quality of education.

Giving a historical background to the issue, Vice President Amissah-Arthur stated teacher trainee allowances were introduced by the CPP Administration, led by Dr Kwame Nkrumah in the 1960s.

However, he said, the Busia Administration in the 1970s cancelled it.

He said the PNDC government under Flt Lt Rawlings re-introduced it when there was an exodus of Ghanaian teachers to Nigeria, and this created the need to attract more people to take up the teaching profession.

He said when the allowances were re-introduced in the 1980s, a new quota policy was applied which gave the number of students to be admitted in a given academic year, based on the national budget.

Vice President Amissah-Arthur explained that the quota system contributed to a consistent decline in admission to the COE, adding that after 20 years of the quota system the COE were operating below 45 percent of their capacity.

He said whereas the policy was introduced to attract and train more teachers, the reality was that the introduction of the allowances had become counter-productive to this objective.

Mr Cephas Kwasi Bodakpui, Principal of the Ada College of Education, said the College which started in 1965 from a humble beginning, was now a Diploma-Awarding Institution, with over 900 students and 41 teaching staff.

He said the school was among the 15 Colleges designated for the training of teachers in Mathematics, Science and ICT.

He said the school had trained over 4960 teachers working in various fields of endeavour.

Mr Bodakpui appealed to the government to provide staff accommodation for the teachers, most of whom were staying far from the school.

He also pleaded with the government to expand the lecture halls, construct the roads, as well as provide modern ICT, to facilitate teaching and learning in the school.

He stressed the need for the government to collaborate with the community, past students and individuals, to help solve the challenges facing the institution.

There was an appeal for funds to support the school and the unveiling of the bust of the First Principal by Vice President Amissah-Arthur.