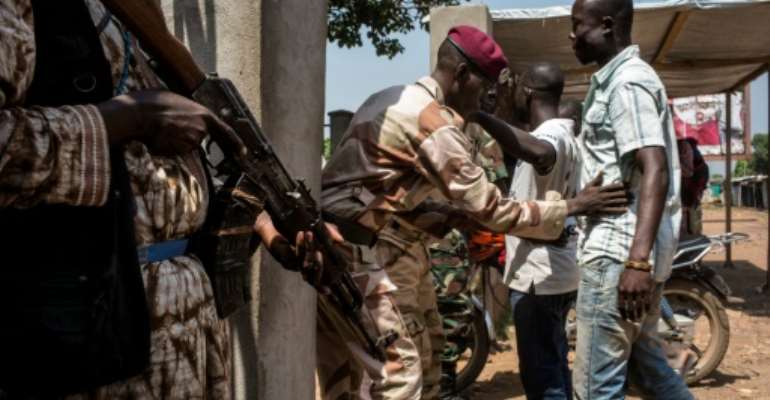 The Central African Republic plunged into its worst crisis since independence after Bozize was ousted by rebels from the Seleka force in March 2013, triggering a wave of tit-for-tat violence with "anti-balaka" militias. By Marco Longari (AFP/File)

Five people were killed in clashes Sunday in the Muslim-majority PK-5 district, heightening fears over whether long-delated elections can go ahead on December 27.

UN peacekeepers and French soldiers massed Monday in the PK-5 district, and a military helicopter circled overhead, to allow its voters to complete polling in a constitutional referendum aimed at ending Christian-Muslim sectarian strife.

Turnout was strong and no new violence was reported by midday in the district, normally Bangui's bustling trading hub.

The Muslim community in PK-5 is split between a majority who favour the electoral process and those opposed, now labelled the "enemies of peace".

"We agree to live together with the Christians. We want to live in peace but we have been taken hostage" by armed groups, said Hassan Brassoul Moussa, a spokesman for Muslim youth in PK-5.

He demanded the arrest of "criminals who want to sow chaos amongst us" and Abdoulaye Hissene, a former Seleka "general" accused of orchestrating Sunday's violence, came in for special vitriol.

"This has to stop," said a young vendor, Mustapha Younous, as people cheered around him. "If Abdoulaye Hissene (and associates) want to do politics they can do it somewhere else. We are businessmen and we want to do business!"

A pensioner wearing a baseball cap with the word "Paix" (peace) emblazoned on it said: "Let them be beheaded if need be. While we have to pay for the broken goods, they go around freely in their cars with tinted glass. We have had enough, enough!"

An unnamed source in the UN peacekeeping force MINUSCA, sent in to quell fighting that has forced 10 percent of the population to flee their homes, reported scattered violence in the north and east of the landlocked country.

Some supporters of the mainly Christian militia known as the "anti-balaka" (anti-machete) also opposed the vote, namely backers of ousted president Francois Bozize, whose candidacy for the upcoming presidential election has been rejected by the constitutional court.

Late Sunday, UN special envoy Parfait Onanga-Anyanga, praised the voters for their "courage", saying they overcame "all fears and threats" to cast their ballots.

"The Central Africans took a historic step in their march towards greater democracy," he told reporters.

The UN Security Council was to discuss the situation following the referendum on Monday.

The vote is seen as a test run for presidential and parliamentary elections set for December 27 to end more than two years of conflict between the Muslim and Christian militias.

The proposed constitution would limit presidential tenure to two terms, fight institutional corruption and rein in the armed militias, blamed for years of chaos and terror.

If adopted, it would usher in the sixth republic since independence from France in 1960 and mark the 13th political regime in a country notorious for its chronic instability.

Results are expected in the next two days.

Unrest has forced the impoverished country to postpone elections repeatedly despite intense international pressure to hold them.

The Central African Republic plunged into its worst crisis since independence after Bozize was ousted by rebels from the Seleka force in March 2013, triggering a wave of tit-for-tat violence with "anti-balaka" militias.

Our police officers don't work with their senses as soldiers...
2 minutes ago