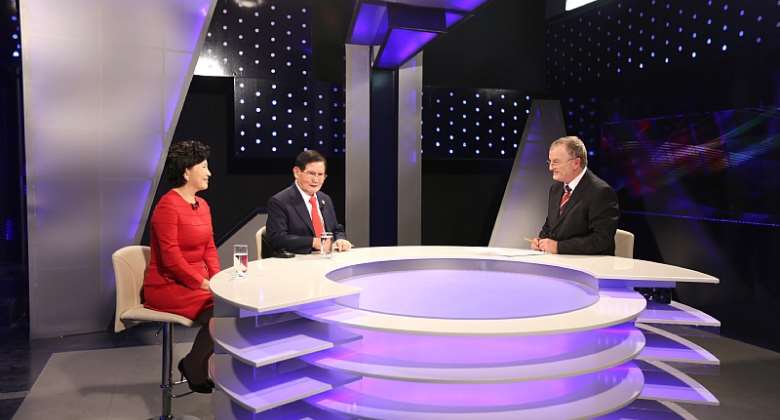 Tirana, Albania - On their 22nd world peace tour, Mr, Man Hee Lee, Chairman of Heavenly Culture, World Peace, Restoration of Light (HWPL) and Ms. Nam Hee Kim, Chairwoman of the International Women’s Peace Group (IWPG) visited Albania to meet international heads of states, religious leaders, media, and youth to speak on the urgency of a united global commitment for HWPL’s two initiatives: an International Convention on the Renunciation and Cessation of War and International Armed Conflicts and an alliance of religions through its WARP Peace Offices.

December 9th at 6:30 p.m., (local time), News 24, Albania’s first and top rated 24-hour news channel, invited the two chairpersons to its studio to cover an exclusive and in-depth interview on their peace initiatives. Mr. Rezar Xhaxhiu, an editor in chief and journalist at TV News 24, hosted the interview.

Xhaxhiu: What are the objectives of HWPL, and what approach does it take to solve pressing issues in the world?

Lee: We, HWPL, have been doing the work of peace with definite solutions that will put an end to all wars around the world and leave a legacy of world peace to our future generations. Having the enactment of the International Convention on the Renunciation and Cessation of War and International Armed Conflicts and networking to build a strong alliance of religions are the two main solutions to bring about peace.

To accomplish such initiatives, HWPL invited and appointed experts in international law as the HWPL International Law Peace Committee at the 1st Annual Commemoration of World Alliance of Religions’ Peace (WARP) Summit. Recently, we presented the revised draft of the Convention in London, UK. Religious leaders around the world are actively undertaking the interfaith peace dialogue based on scriptures through the WARP Office meetings.

While in their pursuit, many religious leaders are deepening their understanding and learning through comparing and contrasting the texts respectively. It is truly remarkable to see the progress. To build a strong alliance of religions, one needs to truly act upon what he or she pledged. 80% of on-going wars can be linked to religious conflicts, only when the scriptures are unified can religions be united as one and extinguish these conflicts. Then, we can truly say that we have built an alliance of religions.

Kim: One of the practical solutions to world peace that Chairman Man Hee Lee of HWPL presented was to have the enactment of the International Convention on Renunciation and Cessation of War and International Armed Conflicts. For this, all members of IWPG based on regional offices in worldwide are actively collaborating to build peace network with NGOs in pursuit of peace.

Once the Convention is implemented, IWPG members in each state will stand and speak out to urge current heads of state to abide by the provisions of the Convention and actively support and put to practice its provisions for their people and nation. During the May 25th Peace walk, Chairman Lee proclaimed the Declaration of World Peace in front of 30,000 youths at peace plaza of the Republic of Korea.

Since that time IPYG members around the world gather on May 25th each year to commemorate the proclamation and support HWPL’s work of peace. The members of IPYG and IWPG aim to serve as the two wings of HWPL to soar high in leading the implementation process of the International Convention.

Xhaxhiu: What are the main driving forces for bringing world peace?

Lee: “It is possible when you act! It remained an impossible task because we didn’t act!” There have been countless organizations and people in pursuit of world peace in the history of mankind, who received Nobel Peace prizes and yet we still live in the world flooded by violence and war. I have been meeting with current and former presidents, chief justices of the Supreme Court, religious leaders and leaders of NGOs to present definite solutions to establish world peace.

Then, I shared this with media to inform people of all nations what we pledged during our meetings. If media and journalists frequently cover such good news, peace will prevail sooner. To all journalists and reporters in the world, I kindly ask you to do your best and carry out your responsibility to report news on peace work frequently and accurately. Let us become the messengers of peace, transcending all nationalities, ethnicities, and religions.

Xhaxhiu: What differentiates peace movements led by HWPL from other peace activities?

Kim: After sharing how tirelessly Chairman Lee pursues to present practical solutions for world peace and what has been accomplished in every corner of the world, we have convinced many that we can certainly greet an era of peace in our lifetime. Many are eagerly expressing their willingness to join the work of peace with us.

Indeed, all of our efforts and dedication have been completed and are being carried out exactly as we suggested and presented to the international community. IWPG and IPYG are setting the foundations for HWPL as the two wings that rally and educate women and youth, who are the task force of the work of establishing peace, of their roles in this generation. That is the most distinguishable feature of our work.

Click the link below to watch the full interview

CHAIRMAN LEE OF HWPL HAS APPOINTEDREZARXHAXHIU, A NEWSREADER OF NEWS 24, AS THE HWPL PUBLICITY AMBASSADOR