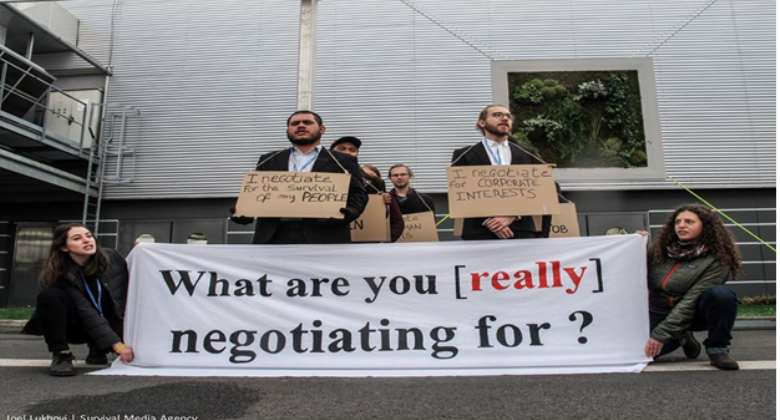 The term loss and damage is often associated with liability and compensation. This topic always raises heat debates and tends to widen the divide between developed countries which are historically responsible for most greenhouse gas emissions and developing countries that are more vulnerable to impacts of climate change. For vulnerable countries, loss and damage is most of all about recognizing that past and current efforts to avoid dangerous climate change and that there are limits and constraints to adaptation.

The United Nation Framework Convention on Climate Change (UNFCCC) has developed a work on loss and damage which aims to find ways to address the issue in developing countries that are particularly vulnerable to the adverse effects of climate change.

“The French presidency is seeing an unprecedented level of support and this is important because we have seen how process can derail talks. But this process, however good has not yet succeeded in dealing with all the crunch issues. The Paris ambition mechanism, the loss and damage language and scaling up commitments by 2018- these issues all need to get sorted. There are still too many red lines on the table. Compromises need to be made, but there are two kinds of compromises: the ones we want and the ones we don’t. There are ones that will threaten ambition and ones that will work to deliver the kind of deal we need”-Alex Mazounie, RAC France.

“The consensus is that this will be a legally binding agreement under international law. Some pieces of the agreement will be applied according to domestic laws and that’s not unusual. The silver lining on non-binding commitments is that this allows countries to put forward stronger targets, move with stronger ambition and bring more countries into the goal setting process. We will need a solid legal foundation that locks in a rule prohibiting double counting of emission cuts as well as a solid legal framework for monitoring and reviewing process-these elements are critical for a successful, transparent and universal deal-Alex Hanfi, Environmental Defense Fund.

The application of the Warsaw International Mechanism for Loss and Damage is another important struggling point for Ghana and other developing countries, who are the first and most vulnerable victims of climate change. Ghana is one of the vulnerable countries to the impacts of climate change where the is occurrence of drought, failure of crops and torrential rainfall causing flood which is a perennial issue in the country and kills hundreds just like the recent flood in the capital city which claimed one hundred and fifty lives in just one night and displacement of people, disrupting infrastructural services like roads, railways and schools which required about more than $25 million for emergency response and caused more than $130 million worth of direct damage.

And Ghana has contributed the least to deserve this, hence developed countries must foot the bill (loss and damage) for any of these extreme events and government support that will help the poor to adapt to climate change is limited.

Yet the new text submitted yesterday weakly addresses finance for loss and damage and does not reflect on how funds in respect to loss and damage will be allocated. Is high time developed countries that are responsible of the current irreversible effects of climate change assume their roles and demonstrate more ambition on how the funds are to be allocated if not the text released yesterday does not suit Ghana and other developing countries as the first victims to the impacts of climate change.

Mithika Mwenda, Secretary General of Pan African Climate Justice Alliance (PACJA) reported that cries from the climate impacted people of Africa an especially woman, children and smallholder farmers is on the rise. The cries also indicate that they are losing their farmlands and animals to floods and drought which most of the time is all their life savings, therefore the issue of loss and damage should be well addressed in agreement and given the importance it deserves.

With climate impacts already causing irreversible death and destruction, it is time that the new UN climate agreement acknowledged that there must be a way to deal with this loss and damage.

Fariya Abubakari is the climate tracker fellow for Adopt a Negotiator.