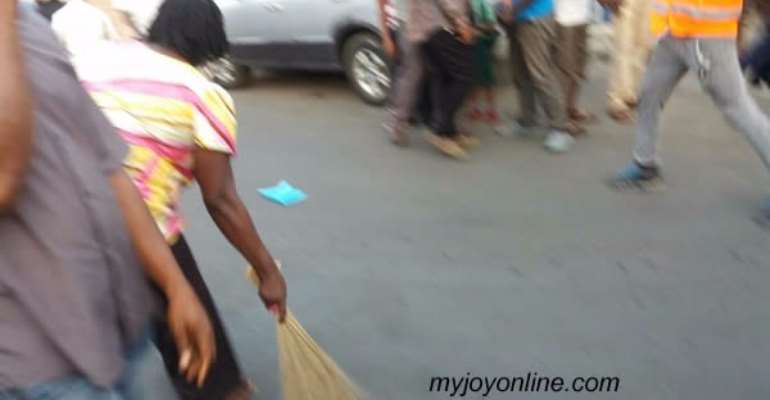 In a conduct that may well be described as a as good riddance, a staunch NPP woman Hajia Fati was seen with a broom supposedly sweeping away the two men as well as party’s misfortune since the party elected new executives in 2012.

About 40 NPP supporters went about with excitement as others danced to a song by hiplife artiste Bisa K'dei. Others were seen popping champagne in an apparent endorsement of the decision by the National Executive Committee to suspend the two.

At a press conference to announce the decision, NPP Communications Director Nana Akomea said Kwabena Agyepong violated Article 3(d) of the party's constitution that enjoins officers to uphold the decisions of the party.

Kwabena Agyepong had publicly rejected the party's decision to suspend the National Chairman Paul Afoko who is seen as his key ally.

The disrespectful conduct of Kwabena Agyepong is part of a litany of accusations leveled against him by four petitioners who asked the Disciplinary Committee to suspend him.

The NPP General Secretary's case collapsed after evidence of improper conduct was mounted and shown to him when he appeared before the disciplinary committee. He resort to begging for mercy.

But the Committee was gritty and escalated the Disciplinary Committee’s recommendation to suspend him for 15 months. They suspended him indefinitely.