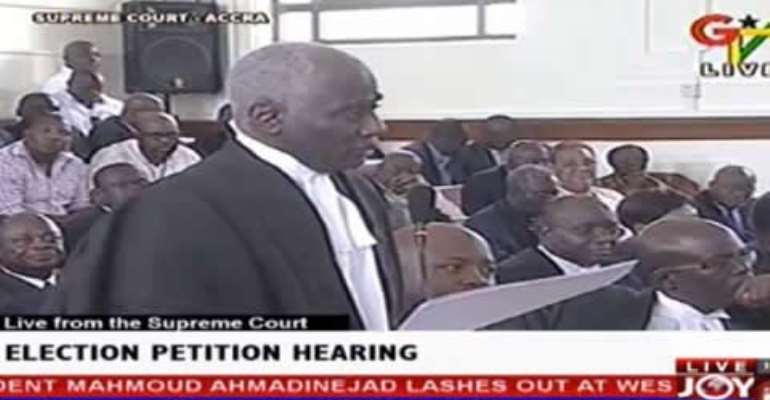 US-based Ghanaian law professor, Stephen Kwaku Asare has called on former Chief Executive Officer (CEO) of the Ghana National Petroleum Corporation (GNPC), Tsatsu Tsikata to drop his suit against Adansi-Asokwa Member of Parliament (MP), Kobina Tahir Hammond since according to him, the 'suit would amount to nothing'.

The former CEO of the GNPC has sued the MP for defamation.

K.T Hammond had claimed that Tsatsu Tsikata, his wife, Esther Cobbah, former GNPC acting CEO, Nana Boakye Asafu-Adjaye and a former Field Evaluation and Development Manager, Mr. Benjamin Dagadu who is currently a deputy minister have been paid specific amounts by the GNPC for their 'invaluable' contributions to the corporation.

The Adansi Asokwa MP who was a Deputy Minister of Energy in the erstwhile Kufuor government claimed, Tsikata had been paid 1million cedis.

According to him, the supposed beneficiaries are not entitled to the payments partly because the Limitation Act does not allow the payment of claims made after six years.

In a statement to the press after filing a writ, Tsatsu Tsikata argued that the said MP in his quest to expose rot in the company brought his name to public ridicule.

“In a radio interview recently, Hon. K.T. Hammond, who was the Deputy Minister of Energy in that period falsely claims that I must have been paid some entitlements.

"He will have the opportunity in court to justify this and other false defamatory statements he has been making against me…,” portions of the statement said.

But the suit, Prof Asare argued on Adom FM's Morning Show, 'Dwaso Nsem' on Monday, would amount to nothing because in his view, K.T. Hammond was only exercising the right to freedom of speech given to all legislators.

Quoting Article 115 of the Constitution to buttress his point, Prof Asare argued in a facebook post that this freedom of speech immunes K. T. Hammond from being sued for comments made on the floor of the house.

Below is his full explanation posted on his facebook wall:

According to Article 115, "There shall be freedom of speech, debate and proceedings in Parliament and that freedom shall not be impeached or questioned in any court or place out of Parliament."

Clearly, Tsatsu's writ will drown in jurisdictional waters if it hinges on statements made by Hammond in Parliament.

But what if Hammond made statements to the media outside of Parliament?

What are the outer perimeters of an MP's job? Can an MP who says X is stealing from the treasury be protected when he says that in Parliament but lose that protection merely because he goes on air to expand or repeat his assertion on air?

What exactly is the purpose of protecting MP's speech in Parliament if that speech is not protected once he steps out of parliament?

Can an MP do his job effectively without being allowed to expand, explain or emphasize the things that he says in Parliament to his constituents and the public?

Is an MP's speech protection in Parliament meaningful if that protection is not extended to his relationship with the media on issues that relate to the protected speech?