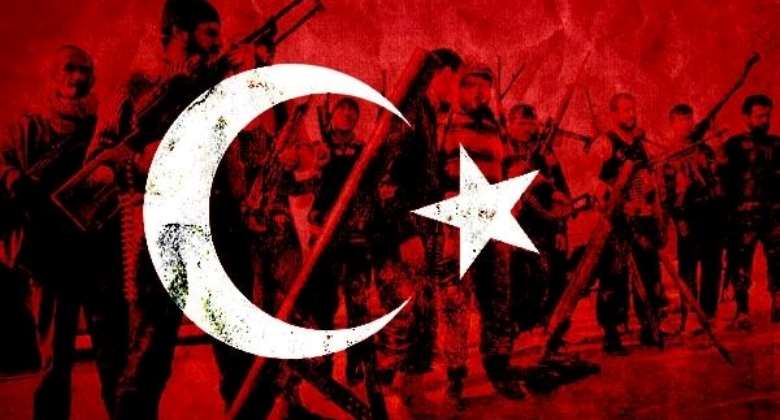 Even if the downed Russian Sukhoi Su-24M bomber aircraft by Turkish Air Force were way inside Turkey the common sense says that it was not an act of aggression or a security threat to Turkey. All the stolen Syrian oil, and terrorist oil trucks goes to Turkey and sold in Turkey, plus human organs, stolen Syrian products, and historic artifacts, to buy NATO weapons from Turkey. But Turkey’s F-16 that downed the Russian bomber was in Syrian airspace for 40 seconds, and before that it was waiting to assault any Russian military aircraft. The downing of Russian jet over Syria is stab in the back NOT by terrorist accomplices, as leader Putin said. It was downed by the terrorist regime of Turks in Turkey.

Why the Turks shot down the Russian Sukhoi Su-24M? Simply because Russia has been carrying out an aerial campaign against the Islamic State jihadist group in Syria since late September at the request of Damascus. The downing was a revenge for the destruction of oil smuggling business that belongs to Recep Tayyip Erdogan’s son. Moscow has repeatedly called on the UN Security Council to take extra steps to determine who was buying oil from the militants.

“Turks” does not mean” Turkey”. Since the Turks are submissive and the majority of them are supporting their long bloody history of Masonic leadership then all the Turks and not any of the other nations within turkey are considered evil.

“Turks” does not mean” Turkey”

Erdogan and APK did not come from vacuum

No nation remains sick forever. And no nation or government is perfect. The health of any government and nation must be measured by a total of large number of social, economic, political and cultural indicators not a single or few indexes. We must look at the bigger present and history. Nations dies after they become very sick and corrupt. The Turks must know that they were sick and corrupt for a very long time and ask your neighboring countries and other ethnic groups “please do not label them as minorities”.

Look at the map and history of Turkey

Look at the map and history of Turkey and its surrounding countries; the enemies of Turkey are all of them plus the Armenians; the Kurds and all other non-Turks in Turkey itself. This proves that Turkey is a rouge state.

Extremists war in Syria is actually a wicked war waged by the Turks, NOT Turkey, against Syria. The Turks must pay for war damages and the stolen oil and all other loot.

Turkey is a rouge state

Erdogan and his son, and Arab gulf colleagues all of them DO NOT believe in any god or faith. They are only after their own personal interests. Caliphate and all other lies are only covers. Together with the Rothschild; Bushs and others, they are top members of secret societies; that is the New World Order NWO. Russia since the Romanovs and any other sovereign state are considered major obstacles and targets to NWO. Erdogan and his son, and Arab colleagues, all support anybody who can be hired and makes profits for this gang and they are manipulating NATO and USA cold war with Russia and Iran

The world must be clear and decisive, agents of secret societies including the Zionists, the Turks and NATO are testing the nerves of leader Putin and the solidarity and the strength of Russia and the free world. The world needs a very active and powerful BRICKS Block led by Russia and China to stand against the agents of secret societies that includes the NATO; EU; USA; Zionists; bankers & the hijacked UN.

Russia, China; India; Brazil; South Africa, and Iran, and all other free nations are bigger than all secret societies and their puppets such as NATO and the USA and their minors and associates.

MEET THE MAN WHO FUNDS ISIS: BILAL ERDOGAN, THE SON OF TURKEY’S PRESIDENT

After graduating from Kartal Imam Hatip High School in 1999, Bilal Erdogan moved to the US for undergraduate education. He also earned a Master’s Degree in John F. Kennedy School of Government at Harvard University in 2004. After graduation, he served in the World Bank as intern for a while. He returned Turkey in 2006 and started to his business life. Bilal Erdogan is one of the three equal shareholders of “BMZ Group Denizcilik “, a marine transportation corporation.

In the next few days, we will present a full breakdown of Bilal’s various business ventures, starting with his BMZ Group which is the name implicated most often in the smuggling of illegal Iraqi and Islamic State through to the western supply chain, but for now here is a brief, if very disturbing snapshot, of both father and son Erdogan by F. William Engdahl, one which should make everyone ask whether the son of Turkey’s president (and thus, the father) is the silent mastermind who has been responsible for converting millions of barrels of Syrian Oil into hundreds of millions of dollars of Islamic State revenue.

Moscow has accused Turkey of helping Islamic State in the illegal oil trade which helps finance the terrorist group. According to analysts, Russian airstrikes in Syria are disrupting the profitable deals for Turkish middlemen, including Ankara officials.

Turkish social media has posted photos of Turkish President Recep Erdogan’s son Necmettin Bilal having dinner in an Istanbul restaurant with an alleged ISIS leader, who it is claimed participated in massacres in Syria’s Homs and Rojava, the Kurdish name for Syrian Kurdistan or Western Kurdistan.

There is speculation Bilal Erdogan is directly involved in the black market oil business with Islamic State.

Turkey shot down Russia’s bomber as revenge for the destruction of oil smuggling business that belongs to Recep Tayyip Erdogan’s son, a Syrian minister stated

Russian Foreign Minister Sergei Lavrov has addressed journalists following the downing of the Russian Su-24 jet by an air-to-air missile launched from a Turkish F-16. On 25.11.2015:

~ Russia will re-assess bilateral ties with Turkey in light of attack on Su-24.

~ Russia not going to war with Turkey but have Q’s for leadership.

~ Russia tried to respect Turkey’s interests, to call for more balance from Ankara.

~ We don’t want to target Turkish manufacturers or Russian companies.

~ Not revenge or hot-headed, Russian response to Turkey based on analysis.

~ There are 28 NATO members; we’ve got sources, Russian info of hot debate at closed-door meeting on Turkey.

~ Russia won’t shy away from contact – today’s telephone call with Turkish FM evidence of that.

~ ISIS, Al-Nusra & other terrorists all named in Vienna accord, legit targets.

More trouble for Weija residents as more volumes yet to be s...
53 minutes ago