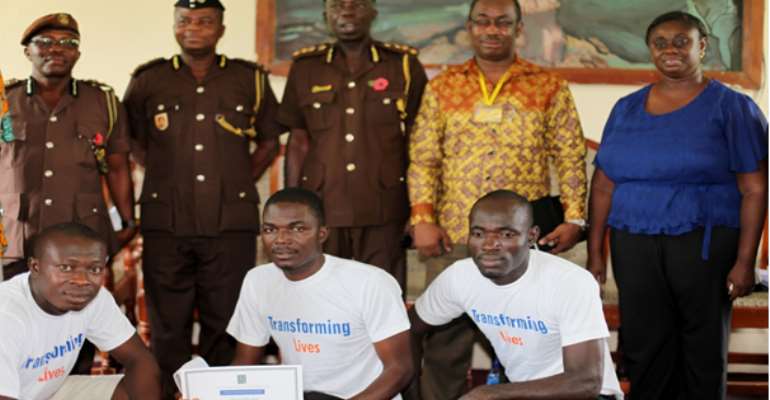 The maiden graduation ceremony has been held for the inmates of James Camp Prison who undertook an eight-week intensive training under the Peace Education Programme (PEP) organised by the Asomdwee Nsem Association.

The PEP is designed to help prisoners discover their inner strength and choice as well as hope, and the possibility of personal peace. The inmates received on-screen (video) tuition in personal development devoid of politics, religion and spirituality.

The Asomdwee Nsem Association is a wing of the Prem Rawat Foundation – an international organisation that seeks to address the fundamental human needs of food, water, and peace on the globe.

In a welcome address, the Officer-in-Charge of James Camp Prison, Assistant Director of Prisons (ADP), Mr. R.K. Asamoah-Fenning, was full of gratitude to Asomdwee Nsem Association for the initiative, and appealed for further collaboration in the terms of inmates’ skills and rehabilitation.

This, according to ADP Asamoah-Fenning, will go a long way to equip the inmates to lead meaningful and responsible lifestyle after serving their jail terms.

He, therefore, thanked the executives of Asomdwee Nsem for choosing James Camp Prison to pilot the programme, as the PEP would be extended to the various prisons in the country.

The Director of Asomdwee Nsem Association, Mr. Bernard Modey, lauded the Prisons High Command for the overwhelming support towards the implementation of the Peace Education in the prisons.

He explained that the objective of Asomdwee is to make peace possible within oneself, and he pledged the Association’s preparedness to embark on massive peace education throughout the various prisons nationwide.

According to Mr. Modey, the PEP is funded by members and volunteers across the country. The Association believes that peace is in-built and it forms part of the fundamental needs of every mankind. “Peace overrides food, water, and shelter”, he stressed.

In a speech read on her behalf, the Director-General of Prisons (DGP), Matilda Baffour-Awuah, emphasised the need for a peaceful society devoid of conflict, war, anxiety, suffering, and violence.

She urged the inmates to bring the knowledge acquired to the fore, and act as ambassadors of peace in line with the Prisons Service mandate of reforming prisoners.

The DGP admonished the prison inmates to propagate the message of peace in all spheres of lives, so as to overcome the tendency of re-offending or recidivism.

She was optimistic that the training will, among others, play a significant role in the lives of the inmates, and expedite their successful integration back into society.

Some of the inmates, who willingly shared their experience, said they feel relieved and confident after going through the PEP. “Even though the prison is seen as a place of emotional and psychological torture, all hope is not lost”, one of the inmates admitted.

The graduating inmates staged two dramas titled, “The hidden treasure” and “The duty within”. The lessons to note are, “All that we seek in life is around us” and “Looking into the mirror, you are a true nature of yourself. Contentment comes from within”, respectively.

In order to get a better feel of the programme, the audience comprising prison officers, invited guests, and inmates were treated to a 15-minute video on peace education.

Under the PEP, the participants (inmates) were taken through topics including Peace, Appreciation, Inner Strength, Self Awareness, Clarity Understanding, Dignity, Choice, Hope, and Contentment.

In all, 40 prison inmates were presented with certificates from the Prem Rawat Foundation upon completing the 8-week training in Peace Education in prison custody.

Disgraceful NPP could find money for 'useless' things but no...
59 minutes ago

Akufo-Addo government most lawless Ghana has ever had – Nyah...
59 minutes ago