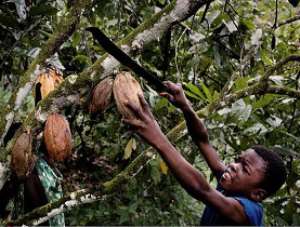 Accra, Nov 10, GNA - Experts working together to reduce child labour in cocoa growing areas on Monday met in Accra, to look at sustainable ways of reducing the problem which was still prominent in some regions in the West African sub-region.

The Team would also strategise on ways to keep a close eye on players in the cocoa growing industry to prevent the perpetuation of child labour and the erosion of the gains made over the years.

The multi-stakeholder meeting was on the theme; 'Working together: linking cocoa-growing communities, supply-chains and national policies'.

Mr Nick Weatherill, Executive Director of the International Cocoa Initiative (ICI), said although much effort has been put into trying to eliminate child labour on cocoa farms, it has been impossible as the problem remains prominent in some cocoa growing regions.

He, however, lauded Ghana for the efforts to drastically reduce the situation through the institution of various social intervention policies to educate farmers and communities on the rights of children and the benefits of education for sustained growth, poverty reduction and national development.

He said the magnitude of the problem calls for joint efforts as its cause has been traced to the high level of poverty among cocoa growing communities, who due to their small land sizes did not earn much to be able to afford labour wages, and therefore, used their family and children for cheap labour.

The ICI, he said, recognised the fact that access to education was still a challenge in most of these communities and has therefore committed funding to assist governments in the provision of education, teaching materials as well as accommodation for teachers in the areas.

He urged participants to brainstorm on new ways of solving the existing problems to help provide a better future for children in cocoa growing areas.

Mr Sammy-Longman Attakumah, Chief Director of the Ministry of Employment and Labour Relations, mentioned some of the social intervention programmes as the Capitation Grant, the School Feeding Programme, the Livelihood Empowerment against Poverty and the Free Compulsory Uiversal Basic Education Programmes.

He said all these were in place to encourage underprivileged communities and parents to send their children to school without giving any excuses.

Mr Attakumah said government was committed to strengthening existing structures to eliminate all forms of child labour and continue to support every development efforts in cocoa growing areas to ensure growth.