Friends of Cuba condemn US sanctions 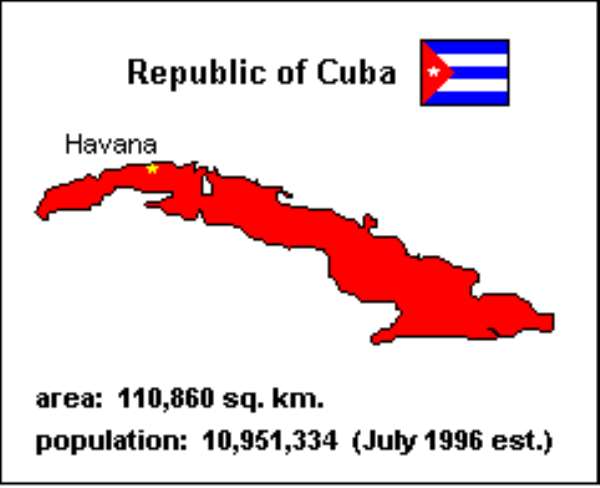 Accra, Oct. 27, GNA - The Progressive Forces and Friends of Cuba, a Ghanaian group sympathetic to the island state, on Tuesday condemned "the suffering imposed on the people of Cuba by generations of embargoes, blockades and sanctions by the United States for the past 44 years."

The condemnation comes a day ahead of a crucial United Nations General Assembly meeting to vote on the necessity of ending the economic, commercial and financial embargo imposed by America against Cuba since July 26, 1959.

In a 12-point communiqu=E9 issued after a meeting in Accra, the group called on "all countries taking part in this all important debate to follow the noble path already well established in the UN to condemn the sanctions against Cuba."

The meeting, organized by the members of Cuban Solidarity Campaign team, comprising Cuban trained Ghanaians, members of Ghana's Parliament affiliated to Cuba and human rights activists, was used to collect signatures of concerned Ghanaians, wishing to see the U.S blockade on Cuba abolished.

The communiqu=E9 expressed "profound disgust" at the extreme hostility shown to the people of Cuba by successive generations of American administration, "characterized by various biological and psychological warfare and provocations against the government and people of Cuba."

The group described the blockade as former American President Kennedy's fantasy, saying, it was imposed on Cuba essentially as a result of the Cuban government's exposure of a Cuban terrorist plot in the U.S to overthrow the socialist system in Cuba under its leader Fidel Castro.

"We are particularly worried about the hidden intentions of the sanctions, which are nothing more than futile attempts at overthrowing the revolution in Cuba, and re-imposing neo-colonial domination and anarchy," the communiqu=E9 said.

The group also condemned the Helm-Burton Act introduced in 1996, which codified all previous U.S administrative directives on Cuba into law and made it difficult for any President of America to make changes pertaining to Cuba without the authorization of Congress.

The communiqu=E9 said the group would like to support the attempt by majority of countries on the platform of the UN to discuss the issue all over again with the view to condemning the oppressive laws for the sake of international peace and respect for sovereignty.

It noted that due to the ineffectiveness of the world's condemnation of "American imperialism" against Cuba since the post cold war era, the former has gone further to stretch its imperialist tendencies to the Middle East, where it supported Israel against the Palestinians and also on Iraq, where it has overthrown the Saddam Hussein regime for non-existent reasons.

"We further call on the international community to condemn the hostile activities of American administration to Cuba and all other countries in the name of world peace," it said.

Professor Lucas Domingo Hernandez, Cuban Ambassador to Ghana, described the U.S sanctions on Cuba as "the most cruel, inhuman and prolonged policies of hostility endured by any people in the history of human civilization."

He said Cuban was determined to defend its sovereignty with the power of the truth and ideas and uphold the right to establish its own political, economic and social system.

"Neither threats nor aggressions will bend the will of the Cuban people to defend the profound process of revolutionary transformations that have brought it so much dignity and so many benefits in these last 44 years," he said.

Prof. Hernandez expressed gratitude to all groups and individuals around the world who continued to show solidarity with the government and people of Cuba, especially in the campaign against the U.S sanction. He said Cuba would continue to defend her independence till victory is ultimately won.