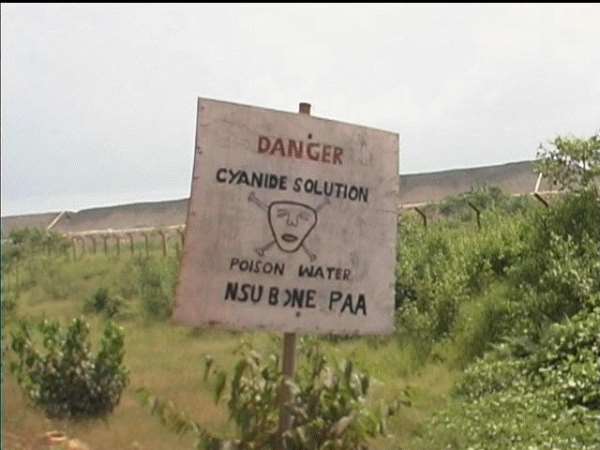 Dumase (W/R), Oct. 24, GNA - An unmeasured amount of solution containing cyanide from Bogoso Gold Limited (BGL) Tailings Dam spilled into Apepra Stream, a tributary of River Ankobra at Dumase, near Prestea in the Western Region on Saturday. Consequently hundreds of dead fishes were found floating in the stream. The cyanide solution spilled through a pipe laid from a new tailings storage facility at BGL Mine site into the external environment. A source at the local Environmental Protection Agency (EPA) Office said a seepage stump was to be built at a point where the effluent from the tailing dam could be pumped back into the dam, thereby preventing the effluent from entering the external environment.

Unfortunately, the seepage stump had not been constructed for the new tailing dam when the discharge of the effluent started. The cyanide solution, therefore, flowed through the pipe and first joined the Agyoo Stream, a tributary of Apepra, which served as source of drinking water for the Dumase community.

Mr Kwadwo Appiah, an Elder of the Town told the Ghana News Agency that on Saturday morning some dead fishes were found floating in the Apepra stream and this made them become suspicious that the stream had been contaminated.

Mr Appiah said a number of Opinion Leaders in the town including, Mr Prince Aidoo, Unit Committee Chairman, Mr Justice Oppong, Chief Farmer and Mr Odei Nkrumah, an Elder, went to Mr Neil Stevenson, Acting General Manager of BGL, at the Mine Site to inform him.

He said Mr Stevenson confirmed the spillage and said the Company would soon come out with a comprehensive report on the incident. The GNA could not reach the Acting General Manager and none of the workers of the Company was ready to talk. WACAM on cyanide spillage into tributaries of River Ankobra Accra, Oct. 24, GNA - Wassa Association of Communities Affected by Mining (WACAM) on Sunday issued a statement on the cyanide spillage into tributaries of River Ankobrah in the Western Region.

"The spillage was from the new tailings dam of the Company into river Aprepre and other rivers including Egya Nsiah, Benya and Manse. These rivers flow into the big river Ankobra.

"The cyanide spillage has affected Dumase town and other communities like Goloto, Juaben, Kokofu and Egyabroni.

"Residents of Dumase and other villages found dead fishes, crabs, shrimps and other life forms floating on the river in the morning of 23rd October 2004. Some of the community people had harvested the dead fishes and eaten them before they had information about the spillage. This indicates that the Company did not even know that the spillage had occurred.

"The human rights violations and environmental problems of Bogoso Gold Limited have been a source of conflict between the communities and the company for a long time.

"We wish to recall that in 1991, there was a cyanide spillage by Billiton Bogoso Gold now Bogoso Gold Limited (BGL).

"Already, the operations of Bogoso Gold Limited have resulted in the death of five rivers in Dumase and most of the communities in the area have no source of drinking water.

"For example, the boreholes constructed by the company for Dumase community turns blue-black when the water from the boreholes comes into contact with plantain and cassava.

"Residents of some communities on the concession of BGL had to voluntarily abandon their cocoa farms and other properties and relocated to other communities because the Company was insensitive to their complaints about cyanide spillages and the effects of the old tailings dam.

The statement said: "Ghana has recorded more than nine cyanide spillages since the liberalisation of the mining sector and WACAM expresses grave concern about the impact of such cyanide spillages on mining communities.

"Cyanide spillages affect community livelihood and have other socio-cultural effects on mining communities especially rural women. We must recognise that community lives are physically, economically, emotionally and spiritually bound to their rivers.

"Pollution of such water bodies through cyanide spillages means loss of income, loss of reliable source of proteins for rural people and communities get traumatised.

"Unfortunately, there had been attempts by the mining industry and their allies to downplay the effects of cyanide spillages and to create the impression that because cyanide degrades with time, its effects last for only some few hours in rivers.

"This impression overlooks the long-term social, economic, psychological and the chemical pollution effects of cyanide spillages. Some of these effects are almost permanent and the nation is going to inherit these legacies after the mining boom is over. This has implication for the economy of the country and development in general.

The statement said: "The spate of cyanide spillages in Ghana is indicative of bad mining practices and WACAM calls on Parliament to take all these community issues into consideration when discussing the new mining bill that is going to be placed before Parliament very soon.

"WACAM calls on government and the communities to hold Bogoso Gold Limited responsible for the impact of the cyanide spillage, which includes the loss of livelihood and loss of access to drinking water, the statement, said.

No ‘aboboyaa’ allowed on Accra highways from November 1 — He...
23 minutes ago