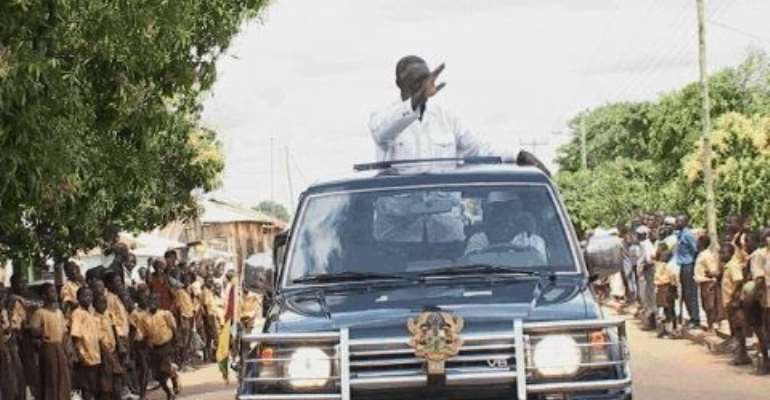 NPP Rally At Mantse Agbona: Intelligence information gathered by The Heritage suggests that the youth of the James Town Traditional Area, The Nleshie Alata Youth Association (NAYA) have planned a very hostile reception for President J.A. Kufuor on Saturday where he will be expected to address an NPP political rally at the forecourt of the James Town Palace.

The Heritage scouts have learnt that intended action against the NPP rally stems from an alleged non-fulfillment of a cardinal electoral promise to return all unused lands acquired by government to Ga Chiefs. The source alleged that instead of unused lands given back to the traditional authorities, “the government is rather selling them to private developers.”

Even though the nature of the intended hostility to the Saturday rally was not disclosed, The Heritage learnt that “any means to embarrass the President to both national and International community would be employed.

Disputes over land between the NPP government and chiefs of the Ga Traditional Council have been rife culminating in President Kufuor in an address to Ga Chiefs at a durbar to round off the Homowo festival last month, promising the chiefs that their demand to have their lands returned to them would be studied and appropriate measures taken. Earlier last Wednesday, the Police striking Force led by Chief Inspector Tay was dispatched to the Dunkona site on Mile 11 of the Accra Kasoa road to protect SSNIT officials who were on the site to check encroachment on the land and have been besieged by over 200 “asafobii”.

In an interview, Mr Chins Sarpong Director of the SSNIT project department told The Heritage that with reference to Executive Instrument E .I.15 of 1995, the land was vested to SSNIT for the construction of houses. He however, could not tell this Reporter why to date there had been no development at the site allowing encroachers to have a field day and steal electricity cables erected at the site on electricity poles.