The ‘Murder’ On Ghana Roads, Whose Fault? Part III 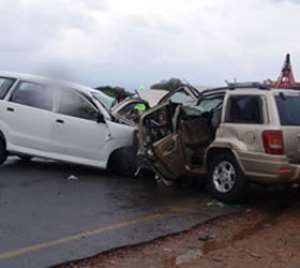 At the beginning of these series, the writer identified three factors as being wholly or in part responsible for the chaotic scenes on Ghana roads. These factors include the State, transport operators/owners and passengers. Part II continued from where Part I stopped, thus, the contribution of the State/Government to the ‘murder’ on Ghana roads.

Continuing on government policies or inaction that contributes greatly to the mayhem on Ghana roads, is the question of the importation of “rubbish” into this country commonly referred to as “home used” or “secondhand” parts, and in most instances, the importation of ‘brand new’ substandard vehicles or spare parts into Ghana.

When it comes to the issue of used tyres being imported into Ghana, the question is, why were those tyres taken off vehicles in their “home countries” in the first place?

Those tyres originate partly as a result of accidents and partly as a result of being illegal to ply on the roads of the home countries. Vehicles that gets involved in accidents and are an insurance write-off, are usually sold off by the insurance companies to auto breakers who dismantle these vehicles and salvage any part or parts that can be used to propel other mechanically propelled contraception’s intended or adapted for use on roads (motor vehicles). Most often, tyres and engines are salvaged and sold off to prospective buyers. One part of a salvaged vehicle the United Kingdom (UK) government and for that matter the European Union (EU) does not permit to be sold to the public from the a salvaged vehicle, is the exhaust pipe among several other parts.

Due to the failure of successive governments to put in place vehicle emissions control policies, such “rubbish” is imported into Ghana in the name of home used or secondhand parts. It is no wonder that, some vehicles emit so much smoke on the roads to such an extent that, one always wonder whether such vehicles will make it past the next ‘useless’ Police check point? Surprisingly, such vehicles sail past the Police without even stopping, because they are ‘regulars’.

When it comes to the question of used tyres, the minimum tyre depth in the UK is two (2) millimeter. Therefore, any tyre below a depth of 2 millimeters is considered illegal to ply the UK roads. This applies to everybody and all vehicles! There is no exception! The question is, why is a tyre depth below 2 millimeters not permitted on the UK roads? The answer is simple. The State values their citizens’ lives, so to prevent needless loss of lives, such “rubbish” is not permissible on their roads. A tyre with a depth of 2 millimeter and above, has a good grip on the road surface and does not easily burst. Used tyres with a depth of 2 millimeters and above are therefore permissible for resale in the UK. Is there a minimum tyre depth in Ghana? Absolutely none! It is high time the government put in place appropriate laws to ban outright the importation of “rubbish” branded used or secondhand tyres into this country.

A similar ban ought to be placed on the importation of substandard ‘brand new’ spare parts for vehicles. On several occasions, I have bought break parts from shops in Accra, and my car rejected those parts because, such parts do not measure up to the manufacturer’s specified standards. On two occasions, I had to request for some specific parts from the UK. The traders at Kokompe or Abossey Okai, claim to sell you ‘brand new break parts’, which actually looks new. Fit it to your vehicle, and the break warning light on the dashboard continues to display a fault in the breaking system. A reasonable motorist will not toy with their life by driving such a defective vehicle. But what about the ignorant and ‘know nothing’ commercial driver who claim to know the vehicle more than the manufacturer? Such insane people parading as drivers puts the lives of everyone including the President, his family, friends, relatives and staff at risk! One has no business buying a vehicle if that individual cannot afford new tyres and standard spare parts for their vehicle when the need arises!!

How many accidents has the office of the President been involved in on the roads in the last two (2) months alone? I can stake my neck out and say that, 99% of those accidents were caused by some defect in either the Office of the President’s vehicle or a defect caused another vehicle to ram into the President’s Office vehicle. The time to act and put in the relevant legislations to save lives and property is now! “Rubbish” being labelled used tyres, has no business in this country. With this hot weather, a bald tyre is only an accident in waiting! A similar ban on all used spare parts will go a long way to save lives. It is no wonder that, the life expectancy in developing countries like Ghana, is 60.95 years whilst that of the developed economies like the UK is 80.54 years. Why won’t we die early with all the scrap yard material left to drive on our roads in Ghana?

Until we get a government in Ghana that will enact laws, rules and regulations without considering the next elections, this country will continue to self-destroy itself! All the problems in Ghana are man-made, and not God sent. God has blessed this country with everything needed to propel us to the top and be the envy of the rest of the world, but due to the selfishness on the part of politicians to continue to be in power, they fail to bring in the needed relevant laws to correct the defects in the system. However, those governing this country, be they the National Democratic Congress (NDC) or the New Patriotic Party (NPP), must note that, at some point they have to and must leave the seat of government. No single party or President can rule Ghana forever! Therefore, it is common sense to pass the relevant laws (no matter how unpopular they may be to sections of the electorate) to bring sanity into the Ghanaian society in general and the roads in particular to stop this needless killings on Ghana roads. Posterity will remember whoever takes this line of leadership and remember him with profound love. It is better to serve one (1) term as a President and do something credible to better the lives of Ghanaians, than to serve two (2) terms with nothing to show for it, other than wanton dissipation of State funds/resources for personal aggrandizement!