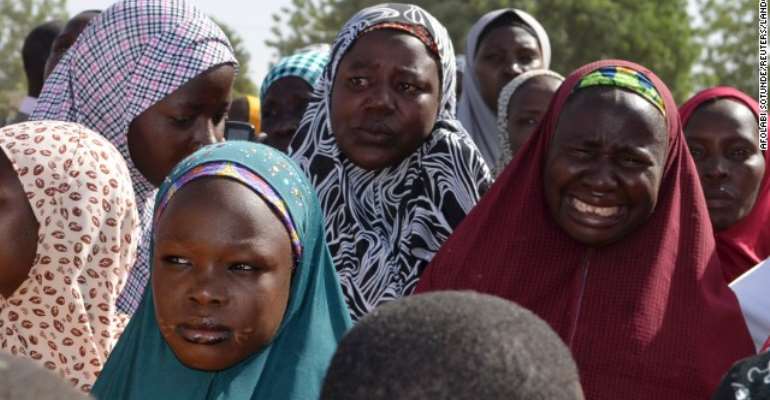 Chibok school girls picked up by Boko Haram Jihadists from a predominantly christian town in Borno State has most probably been raped to death. This was according to the revelations of Senator Ahmed Zanna representing Borno Central District. months before he died. Senator Zanna died in May this year. He was the first prominent northern Muslim to truthfully admit that the Chibok girls were being gang-raped and shot. The then Nigerian military branded him a Boko Haram Sponsor for his exposures.

Two days ago the same Nigerian Military admitted that it has no clue of the whereabouts of kidnapped girls. According to General Olonisakin , Nigeria's Chief of Defense Staff, “So far, we don’t have any report concerning them (Chibok girls), but of course, we have some Boko Haram terrorists, who have surrendered.

Among them are women and children". These girls have been in the hands of rapists for over 500 days and the world is still watching.

It was Senator Zanna who received information of impending Chibok attacks and warned the military twelve hours to the attacks,yet the worst happened to these christian school girls. Senator Zanna's soul will rest in peace for exposing wickedness in high places and standing to defend kidnapped students of another religion even when corrupt Christian leaders and their equally corrupt Muslim accomplices were looting billions of dollars. I wept when I heard that another conscientious senator had passed on. I wrote the first part of this piece last year July and by then there were hopes that these children will be rescued. How far have we fared while school girls are being used as sex slaves.

One of the latest revelation in the ordeal of over 250 abducted Chibok girls and another 250 Christian girls abducted in villages near Chibok was that they are being gang raped and shot for being Christians. This was the summary of the revelations by Senator Zanna representing Born Central Senatorial District According to an interview he granted an online media, the senator said that “.Actually the information I’m getting, some of them are very disturbing. Although I don’t want to mention but they are just raping the girls on camera and even showing them on video, releasing it to the public”.

Senator Khalifa Ahmed Zanna, though a Muslim, was previously accused by former governor of Borno State, Senator Ali Modu Sheriff of being a Boko Haram sponsor who sends people outside the country for trainings in terrorism, but since this Chibok abducted occurred, he has shown great concerns over the fate of the abducted girls even more than the Federal Government and had almost on weekly basis released information that might aid in the release of the girls to the security agents .

Senator Zanna just like Dr Peregrino Brimah , another Muslim, tried all with their powers to know whether the then Jonathan Government can step up in its fight against Boko Haram and permit the arming of local hunters and vigilante to go after the abductors of the girls The sympathy shown by these Muslim leaders are commendable and if many others had shown the same interest, probably this monster called Boko Haram would not have risen. . I want to insist that many Muslims are not in support of Boko Haram and will never be, however, the infidels raping, videoing and shooting fellow Christians of the opposite sex are Muslims and they are doing it in the name of Allah.

Mallam Abubakar Shekau claiming that Allah asked him to molest the girls had said in his televised video that he will sell off the girls as slaves because in his own words Allah told him to do so. According to Shekau” “I abducted your girls. I will sell them in the market, by Allah,” Going further the murderer said that “God instructed me to sell them, they are his properties and I will carry out his instructions,” This came weeks after those girls, most of them virgins, have been sexually molested to heights beyond hellish comprehension ostensibly on the orders of Allah.

Initially these girls were abducted to be used as sex slaves because of their christian heritage.. Boko Haram avoided all Muslim dominated schools and targeted Chibok to kidnap and rape innocent Christians. Later they were married to some old men with syphilis, gonorrhoea and staphylococcus in the name of Allah. A man whose age was past sixty was captured by Civilian JTF in Borno in May last year and he confessed that he has married two of the girls. Obviously, with his capture, the two girls would be rotated to other sex starved insurgents all in the name of Allah. Later they were forced to convert to Islam while those who refused to convert were raped and killed.

More news from sources within the Christian leaders in the north and others claimed that insurgents who couldn’t share in the Chibok girls wife spoils have convinced the leadership of Boko Haram to bring out the girls for serial raping and execution. Senator Zanna confirmed that one of the girls so raped was begging her rapists to be patient for her to recover from the just concluded rape and surrender willingly for another round for fear of being shot like others.

These level of atrocities is being committed in the name of Allah and yet the Muslim communities in Nigeria have not deemed it fit to hand over the high level sponsors of Boko Haram to the government for prosecution. Adherents of this religion of peace have not deemed it fit to enforce the peace in their faith by declaring all out war against these Boko Haram members whose activities are inimical to the peaceful co-existence of Nigeria.

Shehu Shagari, Muhammadu Buhari, Atiku Abubakar,Raji Fashola,Bola Tinubu are all adherents of Allah and during the periods they held sway in government, they gave good accounts of themselves.. While Buhari was known to have fought corruption, Shagari implemented the no victor mantra of the civil war by bringing infrastructures to the East of Nigeria. Tinubu fought Obasanjo’s hegemony and executive recklessness while Fashola developed Lagos astronomically. Therefore there are many good adherents of Allah but few evil ones like Mallam Shekau had dragged the name of this Allah to the mud.

Abducting, serially raping and shooting some forcefully impregnated Christian girls in the name of Allah is a time bomb that will consume both the sponsors of Boko Haram and all the persons who through acts of commission or omission aided the spread of this wickedness

God is warning those playing with the issue of these abducted girls that if the blood of these girls are wasted as we carry on our normal businesses, we are opening doors of unimaginable curse of violence on the nation such that everybody will bear the consequences.

The Muslim community in Nigeria should lead the onslaught against their misguided brothers who have gone astray from the tenets of Islam and became rapists and murderers and President Buhari should ensure that the few survivors from this crime against humanity are rescued and returned back to their families while their high level sponsors are prosecuted.

If a Christian group had kidnapped and serially raped a dozen Muslims in Nigeria, all hell would have let loose by now. Probably there would be no Nigeria. I really thank Christian leaders for preaching tolerance in the face of provocation, but this Chibok issue will bring curse on the nation, if not handled carefully.

The earlier we do that and deliver the few remaining Chibok Christian girls and others from other faith from serial gang-raping and death,the better, before the consequences of this evil falls on the entire nation.