A Forum to benefit Ghanaians 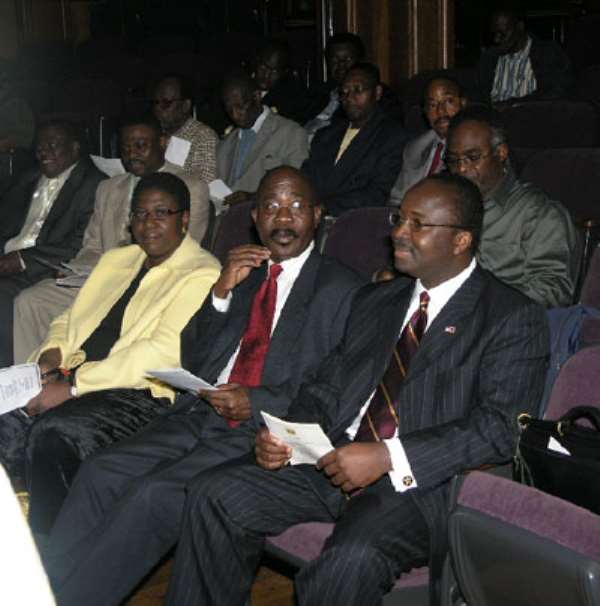 The Cliche' in the Tri-State area is that the National Council of Ghanaian Associations only organizes picnics.

Where have you heard this before? "A Forum to benefit Ghanaians"!!! But not until their new executive members assumed office, they vowed to take their commitment of community service to a level of excellence. Now they are talking the talk and walking the walk, a contrast to the perception they had been getting. Series of home improvements began during the summer when they organized an Olympics torch rally to support the City of New York's bid for the 2012 Olympics. One might ask what will this benefit Ghanaians in terms of the rally.

Simply, it would create jobs and some Ghanaians could be the Beneficiaries as mentioned by its Executive Secretary General; Alhaji Mardah at the time. What followed and most people don't know was that when the Ghana Airways crisis came, the executive members had various meetings and sent letters to Senator Hilary Clinton and Senator Charles Schumer of NY to intervene so that the Department of Transportation in the USA restore the Ghana Airways' suspended license which those Senators indeed intervened. The result from them was the ball is in the court of the Ministry of Transportation in Ghana.

Finally after their great picnic, they organized a forum to benefit Ghanaians. The forum took place at New York 's Columbia University on Saturday, October 9th and had some of the best brains Ghana has to offer, the crème de la crème. These crème de la crème were also introduced as the newly formed Board of directors of NCOGA. They discussed issues beneficial to many Ghanaians in the diaspora; health, immigration, education, law and financial planning/mortgages. Many Ghanaians missed this great opportunity to acquaint themselves with the issues discussed. NCOGA had been criticized in the past for only organizing picnics and disregarding the welfare of Ghanaians but the new executives embarked upon a series of home improvements. When they organized a forum beneficial to Ghanaians, not many people participated. The new executives are doing a great job and it is unfair for any criticism leveled against them. As one fellow participant puts it "We like to complain a lot but when the opportunity comes, no one takes it, where do we go from here". Series of meetings are being planned so that those who could not make it to the previous would attend. We are all in this together therefore let's all make an extra effort to participate these types of forums.

Biographies of the Board of Governors;

Mr. Sharif Touray: Managing Director and Counsel, General Electric Structured Finance Inc. Graduate degree in Engineering and doctor of Jurisprudence in Law. He practiced law at several Law firms on Wall Street. He is CEO of Africash/Africa.com in 1999.

Dr. Abena Busia - An Associate Professor of English at Rutgers University and external tutor at Ruskin College, the Labor Relations College affiliated to the University of Oxford and a visiting lecturer in the program of African and Afro-American Studies at Yale University. Read and performed at conferences, universities, churches and poetry and Jazz festivals around the world. He was honored by Mayor Tom Bradley of Los Angeles in 1990 to partake in the welcoming ceremonies for Nelson Mandela. She has poems in several anthologies such as "Summer Fires, New Poetry from Africa", A Seventieth Birthday tribute to Nelson Mandela just to name a few. Co-editor with Stanlie James and published numerous articles on Black Women's Literature and Colonial Discourse.

Was a board member of WNYC, member of U.S Trade Advisory Committee (Clinton Administration). She is the Founding Member of African Women's Development Fund. She is also a Publisher of African Financing Review. A frequent Television Contributor to both CNBC and CNN.

Dr. Victor Essien - A private practicing attorney specializing in Immigration, International Business Transactions, Civil and Commercial Litigation law, and an Adjunct Professor of Law at Fordham University Law School. He is a Member of the United States District Court, Southern & Eastern Districts of New York and the U S Court of Appeals, Second and Third Circuits. He was a legal Assistant to the Iran-US Claims Tribunal in The Hague, Netherlands in 1986. He was a consultant to the UN Centre for Transnational Corporations from 1989 to 1993. He is listed in WHO IS WHO IN AMERICAN LAW.

Mr. George Ntim: Director of Guest Relations and Community Services, New York Marriot Marquis, Adjunct Professor of Hospitality Management New York University and NYC Technical College. He is a Member of New Jersey Ethnic Advisory Council. He worked with Governor McGreevey to organized Ghana Flag Day in New Jersey. He is the Founder and President of Ghana Foundation, Inc., which provides resources in health, education and recreation to Ghanaian youth.

Mr. Edwin Ditchfield-Agboh - Affectionately called Eddie after graduation from Queens College with Business Administration degree. He joined the World Courier as the Regional Vice President and Director of African Affairs. Managed and supervised 14 African regional offices which gave him the opportunity to shuttle between African and the rest of the world. He established Ambassadorway Inc., the first African Travel Agency in the United States. A founding member of not only of National Council but also Unity Club of USA, now United Volta Association. He served as a Chairman of the Constitutional Committee to draft the Council's Constitution. He was the Vice President, President and a member of the former Board of Directors of NCOGA respectively.

He is the Co-author of Five books on Electrical Engineering. 20 U.S. and International Patents have been granted. Eleven patents pending. Several Adjunct Professorships, Winner of Black Engineer for Outstanding Technical Contributions.

This communication is for informational purposes only. It is not intended as an offer or solicitation for the purchase or sale of any financial instrument or as an official confirmation of any transaction. All market prices, data and other information are not warranted as to completeness or accuracy and are subject to change without notice. Any comments or statements made herein do not necessarily reflect those of J.P. Morgan Chase & Co., its subsidiaries and affiliates.

NCOGA executives and the newly Board of Directors would like to express their sincere gratitude to Dr. Nii Nartey of Columbia University for making it possible to host the forum.