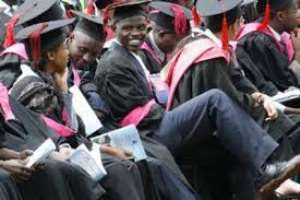 It is usually a state of glamor and abject indescribable and incomprehensible delight for both students and parents when students graduate from high school with incredible performances and consequently gaining admission to the tertiary institutions . The joy even quadruples , and intensifies like that of a barren woman who suddenly picks up a seed when students graduate from tertiary institutions .

Aspirations , wishes and dreams so high about the job market with high expectations of what the future holds for them. Gone were the days during the time of Osagyefo Dr Kwame Nkrumah when university graduates were treated like celebrities and young princes beholding their sword of authority bestowed a kindom to rule . Graduates back then upon completion of their various programs at the University were given a ready job , a car and a bungalow of their own .

Those were the times when a man really benefited from the fruits of his labour of educational toil and hassle. Graduates at the time really felt like men in charge of their affairs starring at the rare view of their bright future watching time fly .

Today, the tables have switched and the ball game is distinct as unemployment has become a deadly cancer eating up hopes, shattering dreams and frustrating dozens of graduates across the length and breath of mother Ghana. The disappointment on the faces of parents gallantly displayed as they do not see the significance and relevance of sending their children to school who would graduate and still depend on them for Pocket money and daily up keep .

This animal in skin called 'graduate 'unemployment' has ripped off and stripped off the dignity of a graduate and the reason for why he is recognized in society . Every shrewd of his pride as a graduate rubbished to the mud as his vast knowledge is tantamount to nothing .

This animal we talking about has caused so much havoc in most developing countries and Ghana our mother land is not left out of the equation . Corruption is on the rampage in the extremism of poverty so does the crime rate rise . Will it then surprise you the number of Internet fraudsters a.k.a sakawa. Not to say they're somewhat justified and vindicated for such ungodly acts in extreme deception but I'm saying unemployment is not ruled out as part of the reason(s)

Students at present choose jobs as against careers . What's the difference? A job is one what one does as a source of livelihood whilst a career is what one loves to do and hence are experts at doing it which keeps them happy pay or no pay . Career natually pay much than than a job when taken seriously because with a career one easily excels with little or no effort at all because of the passion and desire summoned for it . It is no longer in secrecy that most of our brothers and sisters alike will opt for the nurses training colleges than a polytechnic or a university . The underlining reason being that it pays off in the shortest possible time with a ready job awaiting.

Unemployment has knocked many graduates into different kinds of lifestyles like smoking , defrauding , drug addiction, alcoholism and other social vices and serving as a demotivating factor for kids going to school leading a lot of child school dropouts as they do not see the significance and relevance of going to school to end up sitting at home doing absolutely nothing . Today we have a lot of nurses and doctors or teachers who do not really have the passion for what they do but as a means of livelihood so giving off their best becomes a problem .They do not love thier proffesions hence, it becomes a job for them instead of career .

A classic example is the recent strick action by the Ghana medical bar association. If they considered their professions as careers, then it wouldn't matter if they're paid allowances or not because they simply love what they do and would continue doing it regardless . We often consider most nurses at the hospitals workerholics , their colleagues even nick name them as Florence Nightingale just because of the passion they have for their professions and how seriously they regard it . These are the people who take their jobs as a career not a job because they so much love what they do and are very good at it .

Right from the inception of Ghana's independence till now what has really taken us to this bizarre situation of graduate unemployment. Lack of discipline from the citizenry is what comes to mind . People simply understate their ages to keep them longer in public offices even haven reached the age of retirement. Another reason is the courses or programs studied at the universities and polytechnics. Most of if not all the courses pursued at the our tertiary institutions are either irrelevant to the job market or outdated so as to speak .

Most of our programs at the tertiary level are mostly foreign programs alien to the Ghanaian job market so naturally unemployment becomes the end product of it at the tail end of the road . Government lack of creativity is also another vital cause of graduate unemployment . Our educational system is so 'bookish' with every graduate hoping for a white collar job awaiting upon graduation.

Government has failed woefully in the past 8 years or so to create any employment whatsover without any graduate empowerment program to startup their own businesses that not withstanding government slaps graduates with embargo on employment . How are these graduates going to survive and give back their parents who have invested so much on their education.

To battle this , government has to shift from the service based economy we are currently in to an industrial based economy. That way there'd be a lot of factories and industries established to cater for graduate unemployment. Government has to create an economically stable environment for graduates to be able to put to bare their vast entrepreneurial skills to create their own business or companies .