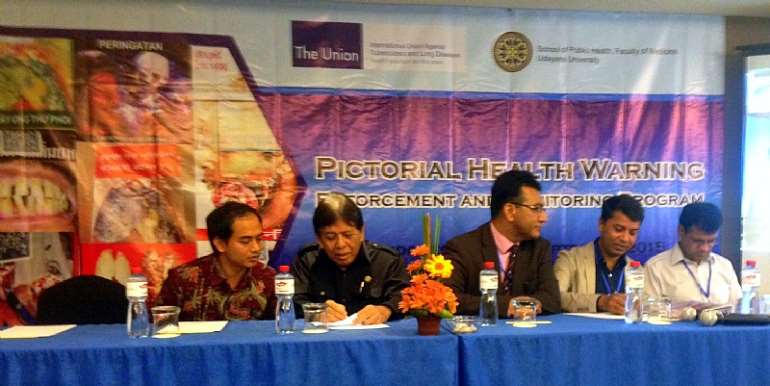 (CNS): So said Mr Shanta Bahadur Shrestha, Secretary, Ministry of Health and Population, Nepal, in a recent interview given to CNS (Citizen News Service), during a workshop on 'Enforcement and Monitoring of Pictorial Health Warnings’ organized by the International Union Against Tuberculosis and Lung Disease (The Union), in collaboration with School of Public Health, Udayana University, Bali, Indonesia.

There are 1.3 billion tobacco users in the world and over 6 million deaths every year due to tobacco use. Moreover 25% of the world’s smokers and 90% of smokeless tobacco users live in the southeast Asia region.

Nepal is a developing country with a low income economy, ranking 145th of 187 countries on the Human Development Index in 2014. It continues to struggle with high levels of hunger and poverty. Despite these challenges, the country has been making steady progress, with the government making a commitment to graduate the nation from 'least developed country' status by 2022.

Nepal, has recently taken a large step towards tobacco control. It is the first nation not only in the Southeast Asia region, but in the world, to have implemented a stringent legislation according to which 90% of the surface area of all tobacco packaging must be covered with pictorial health warnings (PHWs) - comprising text and visuals of harrowing images - designed to warn consumers of the health consequences of tobacco use. This regulation has been implemented since May 2015.

The country has other stringent tobacco control measures in place too, like ban on smoking in public places, work places, public transport, as well as at home and private cars in the presence of another person; complete ban on tobacco advertising, promotion and sponsorship (TAPS); ban on sale and distribution of tobacco products by minors and pregnant women; ban on free distribution of tobacco products; and ban on sale of cigarette packs with less than 20 sticks. Production and sale of e-cigarettes is also banned in Nepal.

All this has resulted in a decrease in smoking rates in Nepalese adults from 26% in 2007 to 18% in 2013, even though smokeless tobacco use has remained almost static at around 18%.

CHALLENGING TO PROTECT YOUTH FROM TOBACCO IN NEPAL

However Shrestha is worried that, despite all these strict tobacco control measures, tobacco use in Nepalese youth is on the rise. It has more than doubled--from 9.4% in 2007 to 20.4% in 2011. In the case of girls this increase has been more than threefold. Controlling tobacco use in young people is indeed posing a big challenge in Nepal.

"In my personal opinion, modernisation and changing lifestyles could be one of the reasons for this. With more than 1 million youngsters working outside of Nepal, international migration and remittances are increasing and this is driving the youth to the so-called modern lifestyle. We have to address this issue seriously. There should be more advocacy at school level and more health education. We have to deal with them lovingly and sensitively. Perhaps linking tobacco use to a decline in ones' health and career graph might have the desired results", said Shrestha.

Cigarette smoking is prevalent more in the high class society of Nepal, while the poor people are more inclined to use chewing tobacco and beedis (cheap hand rolled smoking-form of tobacco). Also, after implementation of the new pictorial health warnings with gory images, people are shifting to buying single sticks, as the warnings create fear in them. But chewing tobacco is cheaper and also available in small packs. So people are shifting to eating chewing tobacco, especially in betel leaves. It is a social norm also to offer betel leaves (paan) laced with tobacco to the guests, said Shrestha.

He spelled out a few measures to deal with the problem. "The first is to have appropriate policy measures in place for producers, distributors and wholesalers and retailers of tobacco products to abide by the law. The second measure is to control illicit trade, which is a multisectoral issue, as other departments, like those of revenue, industry, tax are also involved. So a lot of inter department cooperation is needed. We also need to raise tobacco taxes from the current 28% in order to discourage sales."

Shrestha is happy that the new constitution of Nepal that has just come into being this September, recognizes basic health as a fundamental right of citizens and this is likely to boost tobacco control efforts. As it is, in Nepal there is tremendous political commitment around this issue. For him, and rightly so, tobacco is a political issue too.

"In developing countries the government is the main actor for social development. So if political leadership is committed and strong then policy implementation becomes easy. We currently have a very committed Prime Minister and Health Minister in Nepal. Had they not been proactive, it would have been very difficult to bring in the new 90% PHWs. There has to be political commitment with legal action. Bureaucracy should also be committed. But bureaucrats can only make policy recommendations and implementations.

Policy decisions are taken by the politicians. If the ministers are committed, it becomes easy for bureaucracy to withstand other pressures and go ahead with implementation. To have a good legal instrument is first and foremost and then a mechanism should be formulated by a strong and committed bureaucracy. Without collective partnership of the government, civil society, media and public ownership and participation we cannot beat the strong tobacco industry," he said.

The main issue is not about controlling tobacco consumption; it is about saving lives, said Tara Singh Bam, Regional Advisor (tobacco control) of The Union.