In Search Of Visionary Leadership: The Case With Nigeria 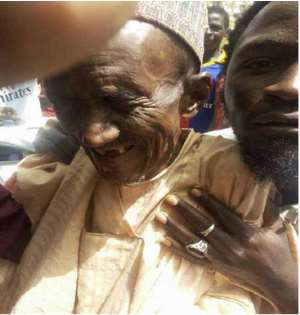 I was extremely lucky to have had my primary education in the late seventies. Probably because we were the first to benefit from the proceeds of the first ever universal basic education (UBE) program run by the federal government of Nigeria at that time.

The program ensured practical free education for all Nigerian pupils. I seem to believe that may be, just may be the government of that time understood partly the observation of John Ruskin (1819-1900) an English art critic, in which he stated,

“The first duty of government is to see that people have food, fuel and cloths. The second that they have means of moral and intellectual education.”

The Picture of 118years Old voter
Later on, I sojourned to one of the best secondary schools in Enugu (the capital of old Eastern region) where we lived. While there, at Union Secondary school Awkunanaw, in my fourth year I strayed into a government class taught by a very vibrant teacher Mr B. Ogbuagu, The concept of “first world” and “third world” as postulated by Alfred Sauvywas the major points of discussion as the teacher espoused our little minds to the bogus dream that Nigeria will someday attain the status of a developed country.

Alfred Sauvyhad made a sharp contrast between developed nations and underdeveloped ones by describing the former as “first world” while labeling the later, the very many developing countries of Asia, South America and Africa “third world”. We knew even as young students that it will take purposeful leadership to achieve such a laudable goal. What has transpired after twenty years is immaterial; the fact that Nigeria is still a “third world” country is particularly shameful.

In this light, Nigerians has held election under very elaborate political saga, threats and insurgence that shook her very foundation to determine who leads us to the promise land. While the major contenders GEJ and GMB went round the country publicly declaring their manifestos, their supporters spurred fire at each other suggesting that Nigeria may face the same political situation that has marred the progress of several states in Africa. As a matter of fact, my five year old son who is in nursery 3 returned from school one day and said they were asked to fast and pray for Nigeria. When asked why, he said, “because President Jonathan and General Buhari was about to fight.” How the bid to lead us almost degenerated to such a barbaric violent combat still amazes me.

In any case, that didn’t happen. Nigeria came out untouched, peaceful and undivided with the electorate making a very prominent statement that has birthed the new Nigeria. Though the present state may have emergedby default, we must use every means possible to secure and sustain it by setting the right objectives. In the words of Plato (428-348BC), “Our object in the construction of a state is the greatest happiness of the whole and not that of any one class.”In the new Nigeria, the electorate determines who leads, the electoral body (INEC) is truly independent, both winners and losers agree on the task of nation building.

Truly history has been made in our very eyes as the 2015 presidential election has turned out great heroes of international acclaim. Professor AttahiruJega, President Goodluck Jonathan, GeneralMohamaduBuhari and the electorate have now set an undeniable precedence for the whole of Africa. The electorate proved through popular participation the growing political awareness in the country or what do you say to 118years old voter?

Jega in playing the role of an umpire dammed all the consequence, the fury of overzealous party faithful’s, several attacks on his person by some characters openly celebrating ignorance targeted at deflating the new robust infant Nigeria. His insistence to use the card reader goes a long way to show-case the longing to get it right in the midst of abiding error.

To say the least, President Goodluck Jonathan carved his name in gold and that will go down in the annals of history when he removed the executive finger and let INEC become truly independent. His approval of the card readers which was later viewed by his party men as his undoing has defined his very impeccable status of an unrivaled statesman in a continent where true leaders are practically scarce. Above all, his acceptance of the election result conceding to the victory of General Buhari the presidential candidate of APC is in all formsconfirmations of his believe in the Nigerian project. In his words, “No body’s political ambition is worth the blood ofinnocent Nigerians.”

Nevertheless, General Buhari at 73 in his fourth shut at the central seat of power gave Nigeria real and celebrated opposition. His antecedents, carriage and believe in imminent change gave him the victory. Our expectations are high. The new leadership must accept and believe in the Nigeria concept. Their vision for Nigeria must be in tandem with the mere wish of my form 4 government class, from “third world to first world”.

Above all, the President elect and his team must be willing to sacrifice their desire, ambition and even life for their fatherland. What more, Africa is short of and in dire need of true nationalist. Our leaders in Africa should walk the path of President Jonathan in setting the pace for a new dawn throughout the continent.