NPP-USA Warns Mahama Over Use of Police Against Political Opponents 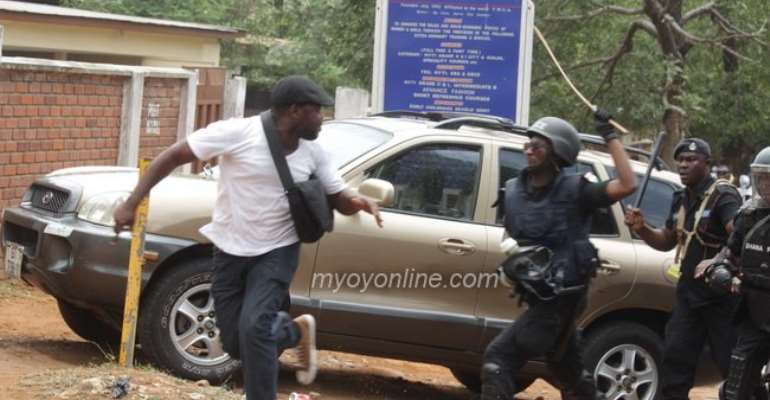 The right of Ghanaians to freely participate in demonstrations in the country is guaranteed by our constitution. Civil society sees wisdom in political agitations about the need for a new voter’s register ahead of the 2016 elections, and therefore proceeds to organize a demonstration to submit a petition to the Chairperson of the Electoral Commission.

A visionary police force should be a happy facilitator of that exercise, considering that such a move seeks to forestall potential post-election civil conflict that would be a bigger headache for the police. Rather, the myopic Ghana Police not only stood in the way of this patriotic gesture, but turned an otherwise peaceful demonstration into a violent one.

Thousands of protesters joined the Let My Vote Count Alliance march, to demand that the Electoral Commission compile a new voters’ register for the 2016 general elections, since the current one is bloated. Hours into the protest, the marchers clashed with police over the route they wanted to use. The protesters had wanted to go to the Electoral Commission's premises to present their petition, but having secured an injunction from the court, the police resisted this. With a stalemate lingering, the police resorted to the use of water cannons, batons, rubber bullets, and tear gas among others to disperse the bewildered crowd.

NPP-USA is appalled by this police brutality, which demonstrates a shameful lack of professionalism by the police leadership. This is a direct result of a bloated IGP bent on doing his master’s bidding. Or does the IGP see a clean voters’ register as a threat that would signal the end of his tenure? Why is Mahama and the NDC so afraid of a new and clean voters’ register when anyone with eyes has come to the conclusion that the current register is hopelessly bloated?

Mahama and his IGP must know that a police force of some 30,000 will be no match to 27 million Ghanaians when the time comes for us to rise up in unison no matter what weaponry they wield. Mahama and his IGP and his EC Chair must know that there is no amount of ammunition and savagery from the police that will stop citizens’ demand for a credible voters’ register, to replace the one they used to rig the 2012 elections to maintain their illegal hold onto power.

Mahama must take a cue from his twin brother Goodluck Jonathan of Nigeria, and allow the people to freely choose who should lead them. When the dye was cast in Nigeria, Jonathan saw wisdom in allowing the process to advance uninterrupted. Today he is wiser and enjoying his post-presidency life, which is better than Egypt’s Mubarak, or Libya’s Ghaddafi who stood in the way of the will of the people. Mahama has woefully failed on all counts as president, and he faces an inevitable defeat at the polls in 2016. His attempt to use the police and other security forces to maintain a hold on leadership will also fail. The sooner he gets this message, the better for him as well as for the nation as a whole.

NPP-USA joins the party leadership and well meaning Ghanaians in condemning this barbaric brutality that Mahama and his corrupt P/NDC has unleashed on innocent Ghanaians. We wish our compatriots who sustained injuries a speedy recovery. NPP-USA assures them that no amount of savagery can stop our quest for democracy.