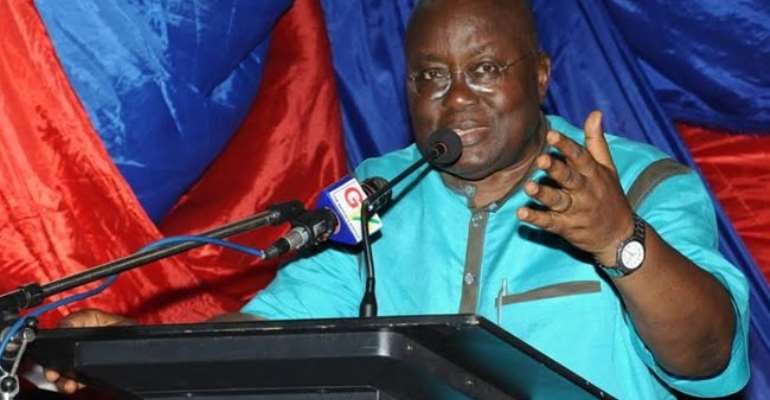 These comments were made by the 2016 presidential candidate of the New Patriotic Party, Nana Addo Dankwa Akufo-Addo, in reaction to the brutal assault meted out by officers of the Ghana Police Service against unarmed civilians who embarked on a demonstration, organised by some pressure groups in Accra, on Wednesday, September 16.

Speaking in Bolgatanga on day 1 of his 2-day tour of the region, on Thursday, September 17, Nana Akufo-Addo stated Ghanaians, after years of dictatorship, have accepted multi-party democracy and will no longer tolerate acts aimed at cowing the citizenry into submission.

“We are determined to continue down the path of democratic engagement and an open society where its citizens can go about their work peacefully. Brute force by the police against unarmed citizens exercising their constitutional rights, should be a thing of the past,” he stated.

He assured all NPP members and sympathisers, and the majority of Ghanaians and stakeholders in Ghana’s electoral process, who are desirous of a new voters’ register ahead of the 2016 election, that, “we want the world to know that no amount of intimidation is going to stop those of us asking for a new register to go about our peaceful advocacy for a new register.”

Whilst associating himself fully with the “excellent statement that has been put out by the General Secretary of our party on this issue”, Nana Akufo-Addo made a demand of President Mahama.

In the wake of this unprovoked attack, Nana Akufo-Addo stated that “I believe the President of the Republic is duty-bound to establish a commission of enquiry to go into the events of yesterday into how come the Police behaved the way that they did, and make the appropriate recommendations.”

The NPP flagbearer further called on Ghanaians to follow the example of the Asantehene, OtumfuoOsei Tutu, who is asking the voices of all Ghanaians to be heard on the matter of the voters’ register, “so it becomes clear what the people want.”

Nana Akufo-Addo, though being of the firm belief that the arguments made by the NPP on the need for a new voters register have proved to be superior and have, indeed, won the day, he stressed that the “reason we are asking for a new register is not because the NPP will gain any advantage.”

The NPP, according to Nana Akufo-Addo, was asking for a new voters’ register because “it will strengthen the credibility of the electoral system and therefore make the outcome of any electoral outcome easy for people to accept. It is the best way of consolidating and guaranteeing the peace of our country and the survival of our democracy, not because it will favour the NPP, but because it will favour our democracy.”

Nana Akufo-Addo made the comments in addressing party faithful, at a meeting of regional and constituency executives, as well as all the newly elected parliamentary candidates and their competitors from the Bolgatanga Central, BolgaEeast, Bongo, Talensi, Nabdam, Navrongo Central, ChianaPaga, Builsa North andBuilsa South constituencies.