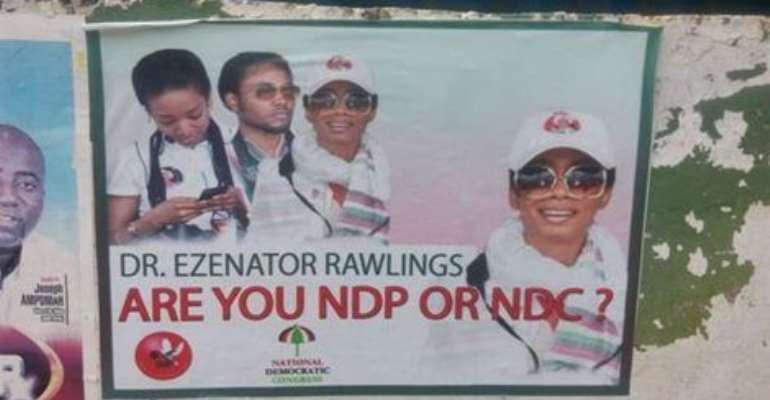 It seems the race to parliament on the ticket of the NDC for former President Rawlings daughter, Dr Ezenator Rawlings will be anything but easy.

However, for Dr Rawlings, the race is starting on an unsteady note.

First, NDC executives in Klottey Korley were reported to have stated that Dr Rawlings was unknown among members in the constituency.

The next campaign by her opponents is drawing inspiration from her mother’s party, the National Democratic Party (NDP). Posters questioning her party allegiance have been splashed in the Constituency.These are not posters campaigning for the daughter of the NDC founder, rather, posters that seem to undermine her position in the NDC.

The poster has both the NDC and the National Democratic Party symbols on it as well as photos of three children of the former first family including her.

All three in the poster are seen wearing polo shirts with what looks like NDC colours, red, white, black and green. However, Dr Rawlings is seen wearing a polo cap bearing the picture of her mum, Nana Konadu Agyeman Rawlings.

“Dr Ezenator Rawlings, are you NDP or NDC?” screamed one poster.

It is not clear which group of people is behind what looks like a plot to water down efforts by Dr Ezenator Rawlings to enter parliament, but are these enough to stop her?