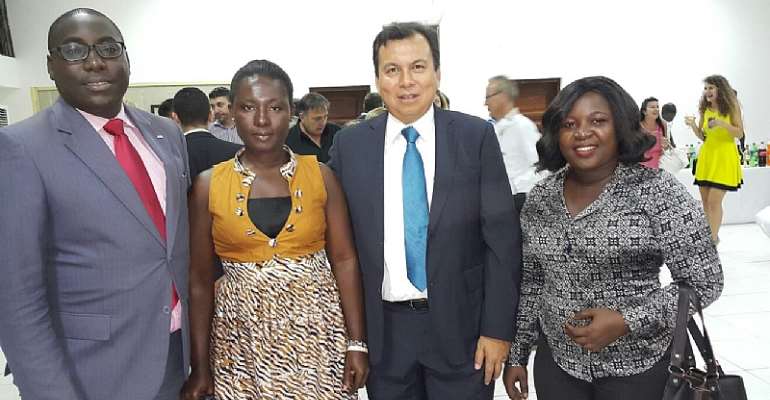 To strengthen the relationship and expand the network between Junior Chamber International Ghana (JCI) and Peruvian Mission in Ghana, the 2015 National Board led by the President, Mr. Albert Ankrah, on the 10th of September this year, attended the opening ceremony of Peruvian Aquarelles exhibition at W.E.B. Dubois center in Accra.

The event dubbed “Paisajes de los Anges” as presented by the chargé d'Affaires of the Republic of Peru, Dr. Elliot Gaviria, brought together unique paintings from 12 different artists whose works portray the rich cultural heritage of Peru. Among these artists whose paintings were displayed are Guzman Emilio who has won numerous awards and prizes such as the First Prize for the International Aquarelle Exhibition in A’iguillon, France IN 2004 and Darwin Chavez, second time First Prize winner for 2010 Iquerio Landscape Painting Contest in Lima.

Speaking at the event,the head of mission of PERU in Ghana said “Peruvian aquarelles are symbols of diversity represented after the colonial as well as the contemporary architecture, through the works of Peruvian artists of different generations and regions. The art of aquarelle painting disseminated in Peru when European artists like Rugendas and Angrand made their way through Lima, in the 19th century”.

He noted however that, the arts have found their way permanently into the history of Peruvian painting through the mulatto painter, Pancho Fierro, a native of Lima. This practice which has become a sort of pictorial tradition in some regions in Peru for example, the Andeans, has not only expanded in Lima but in the dwellings of Arequipa and Puno, by painters like Teodoro Nunez Ureta. Peruvian Aquarelles, precisely from Andeans, can be seen as influence by the day light that bathes the Andean landscapes and sceneries, contributing to such prolific development in those places.

At the end off the event, attendees,mostly diplomats were treated to delicious Peruvian foods and drinks amidst slow Peruvian music.