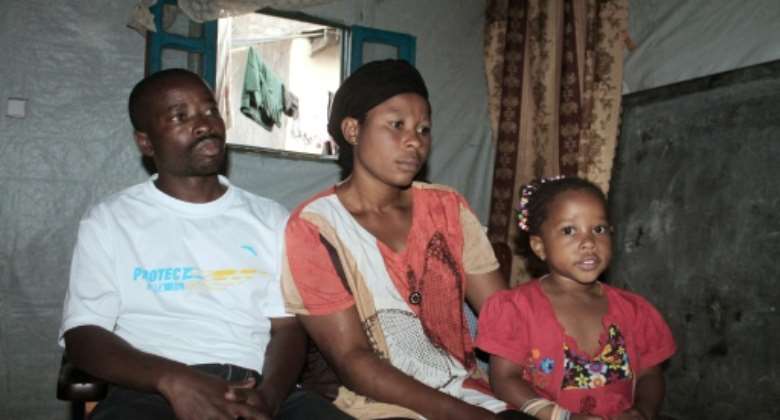 Michel, 38, a Burundian refugee, his wife Claudine, 30, and their daughter sit in their makeshift home in Goma, Democratic Republic of Congo, on March 10, 2014. By Alain Wandimoyi (AFP)

LUSENDA (DR Congo) (AFP) - Celestin is only 24 but recurrent war and political thuggery has driven him four times over the hills from Burundi to seek safety with thousands of others in Congo's equally unsettled east.

"My hope of returning to my homeland is lost," he told AFP at the Lusenda refugee camp sheltering 7,500 people, that was set up in June on the forested border between Burundi and the Democratic Republic of Congo.

As refugees from warfare in the Middle East stream into Europe, 100,000 Burundians are massed outside their tiny country -- or one percent of the population -- after violence that blew up over a controversial, but finally successful, bid by the head of state in July for a third term in office.

Trouble lingers in the country and memories of the brutality of the pro-government militia thugs -- the Imbonerakure -- remain strong with those who suffered their terror.

"I took part in the demonstrations and I was hunted by the Imbonerakure. I have no interest in returning because those who caused me to flee are still in power," says Alain, 20, who left in April.

The camp lies a few dozen kilometres (miles) from the border in the province of South Kivu, an area long rife with armed groups likely to commit atrocities against civilians. A further 6,500 Burundians have been taken in by local families.

An estimated 300,000 people were killed in ethnic violence and warfare.

Lea, 22, first fled warfare as a child in 1993 and was seven months pregnant on her long trek to Lusenda. "The Imbonerakure steal, they burn houses. I left when I saw my neighbour's house burned down."

This year unrest flared in April as Nkurunziza sought to run for a third term despite charges this was unconstitutional. Protests were violently crushed, police attacked, officials assassinated and a military coup foiled in May.

Nkurunziza was re-elected in July in a vote denounced as not credible by almost all of the international community.

The United Nations says the 100,000 refugees are mostly exiled in Tanzania and Rwanda.

The Imbonerakure are the "great fear" of "traumatised" refugees, explains Jose Maria Aranaz, head of the Joint UN Office for Human Rights in the country, who recently visited the camp.

Aranaz has asked for a reinforcement of UN peacekeeping troops around Lusenda "to prevent any attempt at an attack" after "persistent rumours" of infiltration by the Burundian militia, which he calls "a terrorist organisation".

Inside Burundi, "the Imbonerakure enter houses at night and if you don't side with the ruling party, they drag you out and kill you," says Omar, 26, who arrived in Congo in March.

At just 21, Terence has fled conflict three times, to Tanzania in 1993 and 1998, then to the DRC last June. He says his parents were killed by the Imbonerakure.

"The framework for protection and peace in the country are insufficient," he adds. "Even if today they declare that everything is normal, it's best to stay here. I've lost all hope of peace one day. It's the fault of Nkurunziza and the Imbonerakure".

Celestin's parents and nine of his brothers and sisters were killed under the orders of his own paternal uncle, "a general close to the president."

"My uncle tried to force my father to join the ruling party. My father refused and he gave the order to kill him," he says.

Despite the loss, Celestin has begun to smile again and says he is ready to forgive in the name of his Christian beliefs. But he would never dream of going into politics "because for those who are elected, the pattern's always the same: killing."