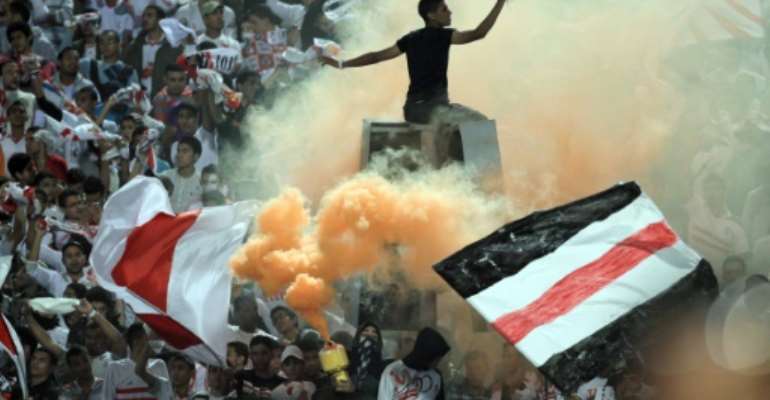 Egyptian fans of Zamalek club celebrate during a match on November 10, 2011. By Khaled Desouki (AFP/File)

Ahmed Tawfik, Ahmed Mekki, Mostafa Fathy and Kahraba scored for the White Knights, who led 2-1 at half-time in a Cairo match played behind closed doors for security reasons.

Captain Oupa Manyisa equalised for Pirates after 32 minutes, but it proved a brief respite for the Soweto outfit, who could have suffered a heavier loss.

Zamalek play former Confederation Cup winners Etoile Sahel of Tunisia in the semi-finals while Pirates meet Ahly in a repeat of the 2013 CAF Champions League final won by the Egyptians.

Should apparently more powerful Zamalek and Ahly succeed, they will meet in a two-leg final of a CAF competition for the first time.

Ahly have won a record 19 CAF titles, including eight in the marquee CAF Champions League, while Zamalek are second with nine titles.

Ahly shaded Etoile on goal difference after both amassed 13 points in Group A followed by Stade Malien of Mali with five and Esperance of Tunisia with three.

Penalty-area aggression gave Tawfik the chance to fire past Equatoguinean goalkeeper Felipe Ovono for the opening goal on 14 minutes at the Petro Sport Stadium.

Manyisa levelled by getting behind the defence to push a Thamsanqa Gabuza cross past goalkeeper Mahmoud Abdel Rahim after 32 minutes.

But parity remained for just five minutes before a clever midfield back-heel set in motion a Zamalek attack that ended with Mekki firing across Ovono into the far corner.

A dribble and cut-back by Kahraba -- real name Mahmoud Abdel Moneim -- allowed substitute Fathy to double the lead with a low 62nd-minute shot.

Kahraba completed the rout five minutes later by springing an offside trap and darting through unchallenged before steering the ball wide of Ovono.

The young goalkeeper, who starred for hosts Equatorial Guinea at the 2015 Africa Cup of Nations, prevented a fifth goal with two excellent late saves.

Leopards and Sfaxien drew 0-0 a few hours before in a disappointing end to the mini-league campaign for both clubs.

Sfaxien have won the second-tier Confederation Cup a record three times and Leopards once and both were expected to mount much stronger challenges for semi-finals places.