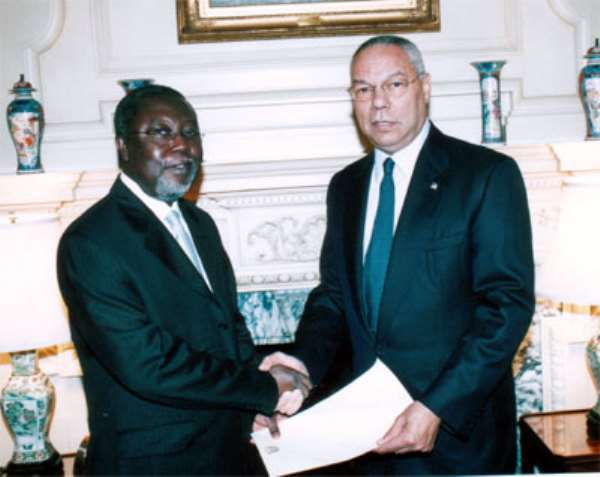 Ambassador Poku says Bush's regional approach is especially helpful Washington -- The Bush administration's proactive leadership in the global war on terror and its emphasis on regional approaches to political and economic problems are policies that deserve the support of all the world's nations, says Ghana's recently appointed envoy to the United States, Ambassador Fritz Poku.

Speaking to the Washington File in his ornate embassy office September 29, the former Ghanaian ambassador to the United Nations declared: "The international community has a duty to fight all forms of terrorism. And if the United States, as a superpower and world leader, has taken a specific position toward fighting terrorism, I think that is the right direction and needs to be supported by regional groupings and regional powers."

In Africa, the White House has taken a regional approach to combating terrorists with programs like the Pan Sahel Initiative (PSI), a military training and supply program aimed at helping Mali, Mauritania, Niger and Chad combat terrorist incursions into the Sahara region.

"Terrorism should be fought on all fronts," Poku said. "As you know, terrorism has no boundaries, and so, therefore, I believe we should not allow instability in certain regions to become breeding grounds for terrorism. In this regard, it is very important that the international community fight poverty and underdevelopment. The goal should be to prevent governments from failing, because when you have failed states, states that are not capable of providing peace and stability, you have fertile grounds for terrorism."

According to the diplomat, one particularly "innovative approach" to addressing the root causes of popular discontent that al Qaida feeds on is "the development assistance program the United States embarked on in 2002, called the Millennium Challenge Account [MCA]."

Even though training initiative is aimed specifically at Africa, where the bulk of U.N. peacekeepers are now stationed, GPOI's goal is to help train up to 75,000 troops who can respond quickly and efficiently to conflicts worldwide.

Both MCA and GPOI "are complementary to the fight against terrorism," Poku said, and "Ghana will work with the United States to see how best we can fight a common foe that is an enemy of humankind and not just of a particular country."

Poku, who formerly served as ambassador to Austria and the U.N. International Development Organization (UNIDO) in Geneva, was asked about European criticism of America's proactive approach to terrorism. "I believe," he said, "that once an international problem has been defined, like the threat posed by terrorists to peace and stability, it is only natural that the Security Council should address the issue. However, in these matters when you are talking about realpolitik, you are talking about the leadership of the United States."

He said: "I think it is only to be expected that you will have strong leadership from the United States in matters that are of vital interest to its survival ... 9/11 had a profound effect on U.S. policies and one should be realistic enough to realize that it cannot be business as usual, and the international community will have to adjust itself to a new situation.

"Of course, in so doing, one is bound to tread on others' interests," the diplomat added. "So I believe some caution might perhaps be exercised in trying to also accommodate the concerns and sensitivities of other countries as well."

Addressing his bilateral role, Poku said he would be practicing "economic diplomacy" to find strategic business partners for Ghana, where, under the leadership of President John Kufuor, a former businessman himself, they would be creating an enabling environment that would attract both internal and foreign investment.

"So far we have been very encouraged by the economic assistance we have received from the United States," he added, "especially the African Growth and Opportunity Act [AGOA], which has spurred Ghanaian exports by allowing duty- and quota-free access to U.S. markets. By so doing, the United States is enabling us to trade our way out of poverty."

In general, Poku said, "All my efforts will be deployed to deepening and broadening the relationship that we have established with the United States, which I can characterize as strong and productive."

(The Washington File is a product of the Bureau of International Information Programs, U.S. Department of State. Web site: http://usinfo.state.gov)