Nfojo Crying Over Nothing - NDC 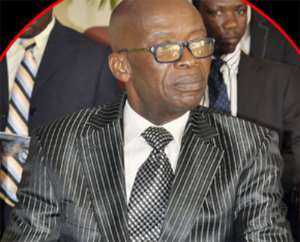 According to Stanly Nelvis Glatey, the former MP was accusing him wrongly and crying over nothing.

Captain Nfojoh had in a petition dated 9 September, 2015, accused Mr. Glatey and three other executives of the party in the constituency of condoning and conniving to prevent him from having access to documents required to be attached to his nomination forms to facilitate the filing of the forms to enable him contest in the parliamentary primaries of the NDC.

The documents in question are guidelines for the filing of nominations and register of branch executives in the constituency. According to Captian Nfojoh, attempts to collect the documents, including several reports to the constituency chairman, Feg Afedo, had proved futile.

The other executives are Gedzia, the vice chairman; Terry Norvor, organiser and Mathias Murrray, whose position was not stated.

He also accused the secretary of conflict of interest as Captain Nfojoh claims he discovered that the other three executives were fronting for Mr. Glatey as they lobbied the branch executives to endorse a form for him (Glatey).

Nfojoh Not Serious
However, refuting his claim, Stanly Glatey noted that Captain Nfojoh was not serious and ready to contest in the parliamentary primaries as the other aspirant, Benjamin Kpodo, who is the incumbent, was also not given any other documents apart from the nomination forms.

This was because the register available is outdated and since the biometric register was yet to be compiled, it was difficult to give out the old one. That notwithstanding, he personally advised the two aspirants as to what to do and gave them the same procedure to follow.

He also advised them to call on the chairman or any executive member if they had any difficulty; hence Nfojoh's claim 'is simply laughable. He is just crying over nothing.'

Mr. Glatey further explained that the guidelines were not a secret document. 'This is not the first time Nfojoh is contesting. He should know better,' he pointed out.

The former EOCO boss believes Mr. Bedzrah had duly represented the constituency to the best of his ability, but stressed that there was the need for a new face with fresh ideas to push further the constituency's developmental agenda.

Bedzrah Welcomes Competition
When contacted, the incumbent welcomed the competition from his fellow party members whom he described as his friends, and reiterated that he was still the man of the grassroots.

He wished them well but noted that his footprints in the constituency were so overwhelming that his opponents did not stand the chance of coming out victorious.

Security Expect Eyes Hohoe Seat
In Hohoe, a peace and security expert, Dr. Ken Ahorsu and one T.K. Dzimegah also filed their nominations in a bid to unseat the incumbent MP, Dr. Bernice Adiku Heloo, who is also the Deputy Minister for Environment, Science, Technology and Innovation.