For Immediate Use On the 9/11 anniversary, former Afghan president Hamid Karzai challenges the consensus view on al-Qaeda, Afghanistan and the so-called ‘war on terror’ • Says al-Qaeda is a “myth” 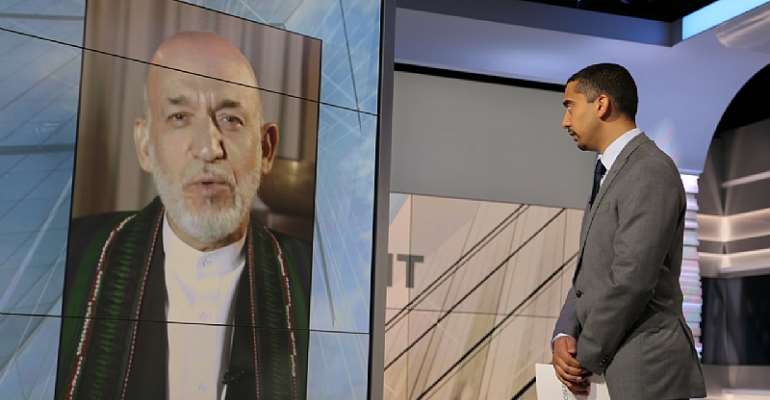 On the 9/11 anniversary, former Afghan president Hamid Karzai challenges the consensus view on al-Qaeda, Afghanistan and the so-called ‘war on terror’

• Declares as “fact” that 9/11 was not plotted in Afghanistan

• Rules out a return to the Afghan presidency in “absolute terms”

“I don’t know if al-Qaeda existed and I don’t know if they exist,” said Karzai. “I have not seen them and I’ve not had any report about them, any report that would indicate that al-Qaeda is operating in Afghanistan. “It is for me a myth… For us, they don’t exist.”

When asked by UpFront host Mehdi Hasan if he agreed that al-Qaeda in Afghanistan had been behind the 9/11 attacks in New York and Washington DC, Karzai replied: “I can tell you for a fact that the operation was neither conducted from Afghanistan, nor were the Afghan people responsible for that.”

Asked again by Hasan if he believed the 9/11 attacks were the responsibility of al-Qaeda in Afghanistan, the former president responded: “I neither believe nor disbelieve something that I don’t know about. I can tell you that Afghanistan was as much a victim of terrorism as was America, as were the people who were killed in the September 11th terrorist attacks.”

Asked whether he believed Osama Bin Laden carried out the 9/11 attacks in New York and Washington DC and plotted them from Afghanistan, he responded, “That is what I have heard from our Western friends. That’s what the Western media says. There is no doubt that an operation, a terrorist operation was conducted in New York and in Washington.”

Commenting on the recent rise of ISIL in his country, he also dismissed any Afghan connection with the group and pointed the finger at neighboring Pakistan.

“ISIL in Afghanistan has no ground here at all. There is no element, there is no medium, for them to grow, or to rise, or to strengthen,” he said.

“Those who are working in the name of Daesh [inside Afghanistan] are definitely Pakistani militia forces,” he added. “Some of them have been captured and ID cards found on them, […]And they are very well supplied. That we know for a fact.”

Karzai, who has been accused by some in Afghanistan of undermining his successor as president, Ashraf Ghani, also denied he was interested in returning to power.

“I’m ruling that out in absolute terms,” he said. “Definitely not.”

For an exclusive episode preview, go to http://aje.io/jpat .

All episodes will be available online at: www.aljazeera.com/upfront