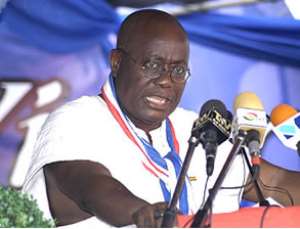 This the party believes, will relieve parents of paying over GH¢30,000.00 before their wards gain admission to the nursing training colleges and the colleges of education.

The Flag Bearer of NPP for the 2016 elections, Nana Addo Dankwah Akufo Addo said this when he addressed students of the Nkawkaw Holy Family Nursing Training College at Nkawkaw, as part of his meetings with party supporters in the Eastern Region.

He said the party would also ensure prompt posting and payment of the salaries of nurses and teachers after completion of their national services.

Nana Akuffo Addo said, he does not understand why Ghana, with all the natural resources, had a greater percentage of the population living in abject poverty.

He urged all Ghanaians to support the party's appeal to the Electoral Commission to undertake a new registration exercise for the forthcoming general election even if the election would be delayed for some months.

The running mate of Nana Akufo Addo, Dr Mamud Bawumia said, all Ghanaians are suffering due to the government's bad economic policy, adding that, taxes had gone up five times since the government came into power and higher than it had been under all past governments in the country.

Dr Bawumia said the country's debt had gone up from GH¢9.5 billion to GH¢ 90 billion since the past eight years and yet the government could not pay the National Health Insurance refund to hospitals and health care givers, capitation grants, common funds and salaries and allowances of teachers and nurses.

Dr Bawumiah urged Ghanaians to examine the economic situation in the country and vote against the NDC in the 2016 general elections.