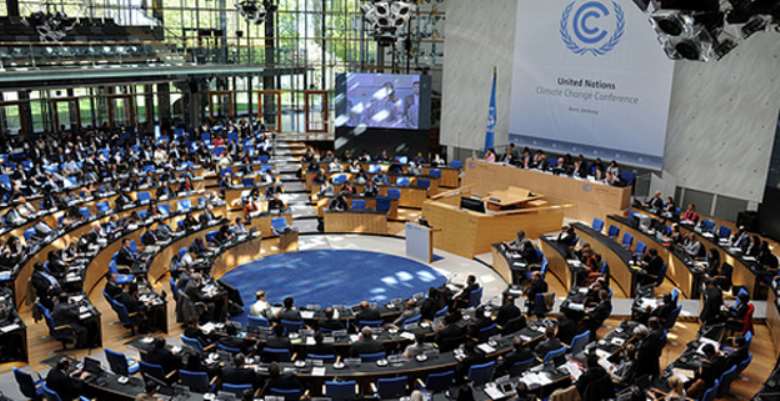 Long term emissions goal in Paris deal will generate certainty and provide clear pathway to a low carbon future by keeping global temperature below 2 degrees. Climate change is already a serious threat to the lives of many less fortunate, but even for the countries that do not belong to the group of the most affected by climate change, the climate crisis is seriously challenging the status quo at the economic and social level.

The most vulnerable to climate change in Africa is Sub-Saharan Africa who relies on rainfall for 95% of crop production. Of the 33 countries identified as highly vulnerable to climate change impacts on fisheries, 23 are in Africa. In addition, recent studies indicate that over 2 degrees increase in global temperature will affect agricultural productivity in the tropics and this impact will rise and will also mean a “cooking” of the African continent.

AMBITOUS AND EFFECTIVE TARGETS
Ghana needs both ambitious long term and effective short term measures as Thomas Princen (2009) argued that humans have the ability both for short term and long term decision making; it is not impossible to advance short term goals and make substantial progress on long term goals during a life time.

The short term measures of climate change affecting the lives of Ghanaians are extreme monsoon precipitation, extreme heat and extreme drought periods impacting humans and crop failures. Each of these requires a short term response which resembles disaster relief. Therefore Ghana needs to set an ambitious target that would constantly be reviewed and make new commitments; hence the 5 year cycles for continuous growth of the economy and development of the country.

Scientist have argued that humanity must achieve a state of zero greenhouse gas emissions by the end of this century in order to hold the global temperature. The scientist said “the world needed to reach a long term vision of climate neutrality and seize the obvious benefits of clean energy and sustainable development in order to stay below this 2 degrees defense line against the worst impacts of climate change”.

The world’s most vulnerable countries- such as Samoa, Ethiopia and the Maldives -have shown strong support for rapid emissions cuts needed to get to zero greenhouse gas emissions by 2050. According to the Intergovernmental Panel on Climate Change, any delay could put the world’s health in jeopardy. If these countries are pushing for rapid emission cuts to get to zero greenhouse gas emission, so can my beloved country, Ghana gifted with abundant renewable resources.

In order for Ghana to achieve this zero net emissions from the combustion of fossil fuels in the second half of this century, Ghana needs to learn from the policies some countries are implementing to drive the investment and technology shift needed to break its dependence on fossil fuels and to highlight the stumbling blocks that will require strong political will to be overcome and strong financial aid from the rich countries.

Some countries are making a low commitment in cutting emissions as pollution levels are rising faster now than at any time in history despite recent improvements in the Western world. Countries like the US, India, China and other big carbon emitters-pumping out their rich burning fossil fuels so much of the climate pollutions that is now in the atmosphere. These countries have used scientific uncertainty about climate change to justify its policy of not reducing much greenhouse gas emissions and economic arguments are also use as an excuse for inaction.

Globally, 41 companies have already committed to work towards this goal by setting targets that are aligned with a 20C pathway. The companies and sub-national governments setting these targets more than 2billion metric tons in emissions across their value chains, equating more than 4% of annual worldwide emissions. These leading companies are demonstrating that setting long term and setting science based targets does not inhibit their financial performance but rather helps hedge against climate risk and a potential resource-constrained future.

Limiting warming at below 2 degrees will yield a number of avoided impacts, such as keeping sea level rise <1 m, to prevent severe, pervasive, and potentially irreversible impacts while allowing ecosystems to adapt naturally to ensure that food production is not threatened and will also stabilize greenhouse gas concentrations in the atmosphere at a level that will prevent dangerous anthropogenic interference with the climate system.

Yet the climate pledges submitted to the UN by individual countries don’t do enough to achieve the above advantage of holding warming below 2 degrees and reducing global greenhouse emissions. Meanwhile the success of the global agreement depends on each nation’s ambition to reduce greenhouse to keep global temperature below 2 degrees.

According to climate action tracker report, the targets countries have set so far to limit their contribution to climate change over the next several years won’t do enough to keep global warming below 2 degrees threshold. Countries need to plan to reduce emissions by 12 to 15 gigatons of carbon dioxide equivalent by 2025 and 17 to 21 gigatons by 2030 if they are serious about staying under 2 degrees. Limiting warming below 2 degrees is possible as long as more action is taken after Paris.

The is the need for these countries to strengthen their pledges and those who are yet to pledge which include the highest emitters such as India, Brazil, Iran, Indonesia, Saudi Arabia, South Africa, Thailand and Pakistan must aim to reduce carbon emissions as much as possible. These countries will have to make much more drastic cuts if the Paris climate talks are to achieve the goal of keeping warming to below 2 degrees along the line of getting to zero emissions in the next 85 or so years.

If these pledges is going to be as it is without frantic effort in more drastic cuts, then these events will put at a significant danger to disadvantaged populations in the north and southern part of Ghana and some vulnerable countries in the world of which their livelihoods depend on natural resources such as agriculture and will be at risk from conflicts over scarce resources between them; and people will be displaced or forced to migrate as it happens in the case of Syria. All countries need to act now otherwise; the target of keeping global warming below 2 degrees Celsius will be missed as climate analytics warns. The longer we wait and delay action, the more we will lock ourselves into higher risks and fewer solutions.