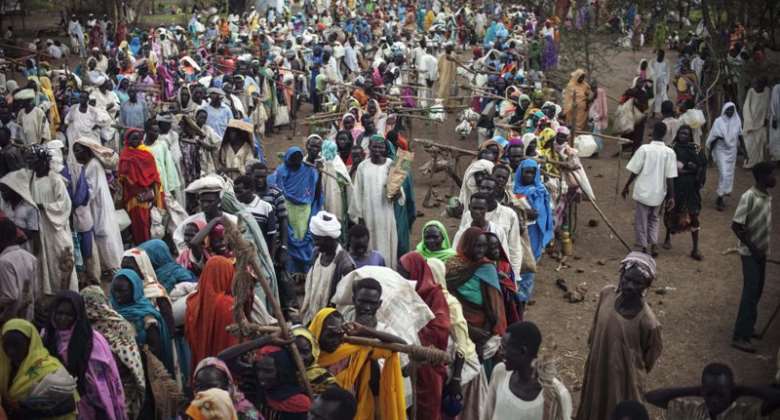 There is much being written about the refugee crisis in Europe at the moment but none of what I have read explains why the problem is occurring and what will need to be done for the problem to be addressed.

Refugees are just one symptom of a deeper crisis. Moreover, like other symptoms of this deeper crisis, the global elite is happy to use this symptom to keep us utterly preoccupied; after all, the immediacy of the refugee problem is all too demanding of our attention and our compassion.

Thirty years ago, on 9 September 1985, I tried to resuscitate a baby in the Shagarab East 3 Refugee Camp in Eastern Sudan at the height of the Ethiopian war and famine. As a lifesaver, I had been expertly trained in cardio-pulmonary resuscitation. My attempt to resuscitate this child failed: the doctor advised me that the baby was dead and I watched her mother as I handed the dead child back to her. The mother was, understandably, utterly distraught. And, frankly, I was in considerable emotional pain myself.

In the adjacent camp, where I worked as a relief worker, five refugees died every day, mostly from simple illnesses, like diarhoea, associated with malnutrition. In the jargon of the UNHCR, our death rate was 2.5 per 10,000 per day. That meant, in our camp of 20,000, five people died each day. Every day.

My time spent working in that camp and visiting many others during the same period, taught me one thing: ultimately, while support for refugees is necessary for the survival of some of the individuals forced to flee their countries and homes, this will not stop the creation of circumstances which generate refugees in the first place.

At the geopolitical level, Thalif Deen has adequately summarised the major cause of the current 'refugee problem' in Europe:

'The military conflicts and political instability driving hundreds of thousands of refugees into Europe were triggered largely by U.S. and Western military interventions for regime change – specifically in Iraq, Afghanistan, Libya and Syria (a regime change in-the-making).

'The United States was provided with strong military support by countries such as Germany, Britain, France, Italy and Spain, while the no-fly zone to oust Libyan leader Muammar Gaddafi was led by France and the UK in 2011 and aided by Belgium, Denmark, Norway and Canada, among others.' See 'Europe Invaded Mostly by "Regime Change" Refugees'. http://www.ipsnews.net/2015/09/europe-invaded-mostly-by-regime-change-refugees/

Of course, there are other reasons why people become refugees. But war and the destructive environmental consequences of human industrial and other activities (leading to 'climate catastrophe' refugees) are primary drivers of the problem. Or are they?

When I read the news on progressive news websites, I have no problem identifying the multitude of problems we face: war itself, economic exploitation of the people in Africa, Asia and Central/South America, environmental problems too numerous to list and violence against women and children, indigenous peoples, working people, people of color and various other social groups (depending on the society) to mention some of the main ones. And these problems are so advanced that humans stand poised on the brink of precipitating our own extinction.

Except it is not us, as a collective, who is responsible for this catastrophic state of affairs. It is a relatively small number of people, each of whom is quite insane. And it is these people who drive the decisions being made in our world that have, for example, created the current refugee crisis in Europe.

These people seek power, profit and personal privilege at the expense of the rest of us. They decide to destroy countries or regions because, in their insane worldview, it 'benefits' them to do so. The military destruction of a region might give them the power to share in the control of a resource or market. It might make them a profit. It might privilege them in relation to others in their (very limited) social world. The discourse in which these people are engaged is incredibly limited. It is always about control.

And the reason for this is simple: They are utterly terrified. They had all of their control taken from them as children and now seek it endlessly as highly dysfunctionalised adults. Adults who are insane: devoid of the love, compassion, empathy and sympathy that makes those of us who are normal respond with genuine concern to the plight of refugees and others who suffer.

So when you hear people – whether it be politicians, corporate figures, academics, military leaders or media personnel – justify policies and actions, such as military violence, that lead to greater human suffering, remember that you are listening to someone who is seriously psychologically damaged. Conflict is not always easily resolved but it requires listening and understanding, as well as talking. You cannot resolve conflict by killing people.

If you would like to read more about the state of mind of those who act to create circumstances that generate refugees, you can do so in this article: 'The Global Elite is Insane'. http://www.modernghana.com/news/521566/1/the-global-elite-is-insane.html And you can read much more detail in 'Why Violence?' http://tinyurl.com/whyviolence and 'Fearless Psychology and Fearful Psychology: Principles and Practice'. http://anitamckone.wordpress.com/articles-2/fearless-and-fearful-psychology/

So what do we do? Well, I am heavily in favour of doing what we can to reduce the suffering of refugees now. But, as I committed myself thirty years ago, I am also working towards creating a world in which no human being ever becomes a refugee again.

A big ask? You bet. But I don't intend to let the insane people who seek total control of this planet do so without making every effort I can to stop them. If you agree with me, here's some key things we need to do.

We need to stop terrorising children so that they don't become like the elite and their paid agents in politics, the business world, academia, the military, the judiciary and the corporate media. See 'My Promise to Children'. http://www.modernghana.com/news/501714/1/my-promise-to-children.html People who are not insane have a much better chance of resolving conflicts nonviolently, even if it still isn't easy.

We need to take drastic personal action, not rely on politicians who virtually all function as agents of the global elite, to reverse much of what is wrong with our world. If you like, you can participate in a fifteen-year strategy for doing so by joining those involved in 'The Flame Tree Project to Save Life on Earth'. http://tinyurl.com/flametree

In some circumstances, such as in response to the current attempts to consolidate their control of the global economy via mechanisms such as the Trans-Pacific Partnership (TPP) and the Transatlantic Free Trade Agreement (TAFTA) or to destroy the natural environment by logging rainforests for example, we also need to take collective action to resist the insanity of the global elite. This is done most effectively by using strategically applied campaigns of nonviolent resistance. See The Strategy of Nonviolent Defense: A Gandhian Approach. http://www.sunypress.edu/p-2176-the-strategy-of-nonviolent-defe.aspx

And if you wish to publicly declare your commitment to doing everything you can to end the elite-driven violence and exploitation in our world, you can do so by signing the online pledge of 'The People's Charter to Create a Nonviolent World'. http://thepeoplesnonviolencecharter.wordpress.com

In essence, elites generate one crisis after another as an inevitable outcome of their insane actions to perpetuate, consolidate and expand their control over the rest of us. If we are not sufficiently aware, we can become preoccupied in just dealing with one or more symptoms of their insanity. Elites want more refugees partly because it helps to distract us from analysing and resisting what they are doing overall.

While we must act in solidarity with those they victimize, like the refugees fleeing their war zones at the moment, we also need to expose and strategically resist the global elite itself or, eventually, suffer the same (or an equivalent) fate as today's refugees.

Biodata:
Robert J. Burrowes has a lifetime commitment to understanding and ending human violence. He has done extensive research since 1966 in an effort to understand why human beings are violent and has been a nonviolent activist since 1981. He is the author of 'Why Violence?' http://tinyurl.com/whyviolence His email address is [email protected] and his website is at http://robertjburrowes.wordpress.com