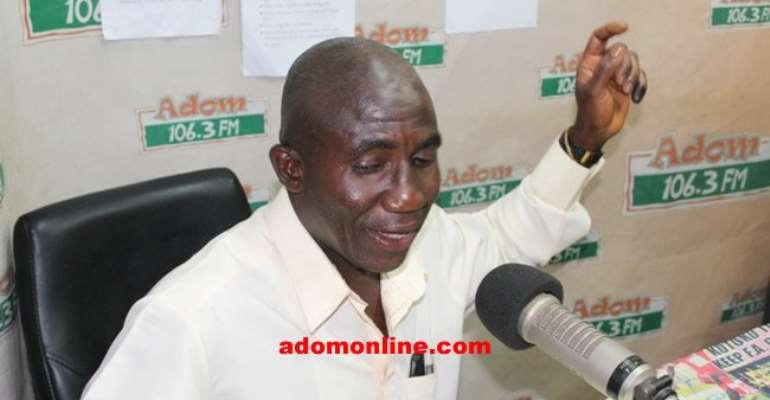 Beleaguered George Boateng has shrugged off criticisms about his mental capacity and declared that he is qualified to lead the nation.

He has also warned against attempts by the party to put “impediments on my way”.

Mr. Boateng told Joy News’ Kwakye Afreh Nuamah Tuesday that the party’s manipulation to prevent him from contesting President Mahama is “uncalled for”.

“I have paid for my forms and I am ready to contest the president so nobody should prevent me,” he affirmed his stance.

“They should allow me to contest the President. I am qualified to be the leader of this party, National Democratic Congress.

"I am qualified to lead this nation and I want to bring change to this nation,” he stressed.

George Boateng, who is a branch youth organizer of the NDC at Oyarifa in Accra, was at the governing party's head office at Adabraka Tuesday September 8 to pick the party's presidential nomination forms. He was however denied access to the forms.

A fortnight ago he picked forms to contest the president but it turned out that he was sold a draft copy of the presidential nomination form.

The deadline for submission of nomination forms is Friday, September 11, 2015.

NDC deputy General Secretary Koku Anyidoho has told Joy News the party will never sell forms to George Boateng because the party does not support his idea of legalizing ‘wee’.

But George Boateng has said the posture of the leadership of the party flies in the face of democracy.

At the party headquarters today, the General Secretary of the NDC, Johnson Asiedu Nketia, the only party executive authorised to issue presidential nomination forms, although was in the office never attended to him.

George Boateng said a security officer took his mobile number and assured him that the party will call him Wednesday. “If tomorrow they refuse to call me, then I will go to the court.”

He sensed that the party has a “deliberate” ploy to sabotage his presidential ambition.

Many in the party have questioned his mental capacity to lead the party into the 2016 general elections.

Demonstrating resilience, Goerge Boateng Monday submitted himself to psychiatric examination at the Accra Psychiatric Hospital ostensibly to prove that he is mentally sound to contest for the flagbearership of the NDC.

The results of that evaluation are not yet ready but he believed he could pick up the nomination forms and start the processes of collating the necessary endorsements.