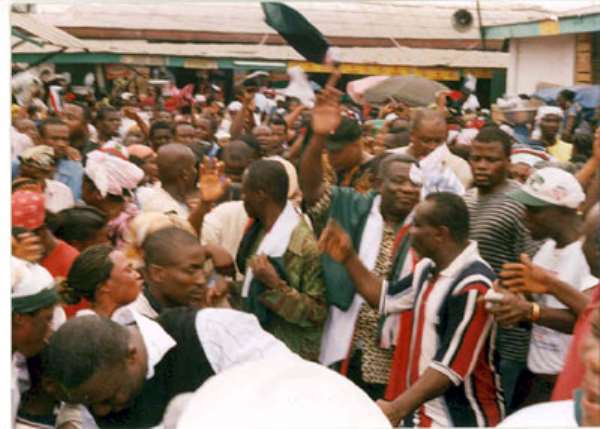 THE PRESDENTIAL candidate for the opposition National Democratic Congress (NDC), Prof. John Evans Atta-Mills has accused the National Reconciliation Commission (NRC) of having failed to accomplish the purpose for which it was established.

According to him, some of the worst human rights abuses of the PNDC era were recorded in the first six months of that government's tenure, which was between January and June 1982.

He said the abduction and murder of the three High Court Judges and the retired army officer, was the most atrocious of them, which occurred on the last day of that period on June 30, 1982.

"The NRC would have done this country a lot of good if it had subpoenaed all those who served in and with the PNDC during that period to give an account of the extent of their knowledge of the human right abuses of the time including the abduction and murder of the judges and the army officer and what they did about those abuses", he observed.

The NDC flag bearer, who was speaking under the topic, 'Our Vision for the Future" at a public lecture at the Kwame Nkrumah University of Science and Technology (KNUST) in Kumasi, also stressed that President Kufuor was not only a member of the PNDC government but the PNDC secretary (Minister) of Local Government at the time the judges were abducted and murdered yet he was not subpoenaed.

He noted that the records would have been set straight if the NRC had tried to determine whether all those who were in government at that time should not take collective responsibility for the human rights abuses of those times.

Atta-Mills described the inability to identify the murderers of the Ya Na and 40 of his followers in March 2002 under the NPP administration, as most inexcusable and attributed it to the history of human rights abuses in the minds of the people.

"What happened to the Ya Na should never have happened. That we cannot find those who committed the Yendi murders means that we have not learnt any lessons from the tragedy of 1982", he stressed.

He accused the government of having lost the opportunity to achieve a united nation when it populated its security and intelligence agencies with dissident exiles who appeared to be full of hatred and vengeance and talk only about revenge against Rawlings and PNDC as well as the annihilation of the NDC party.

The presidential candidate, however, stated categorically that under a new NDC government, human rights would be scrupulously observed and that as a matter of policy all would enjoy human rights.

"The harassments, intimidations, prosecutions and persecutions some people have suffered under the present government, an administration that is incidentally led by a president who served in the PNDC era of worst human rights abuses, and who ought to have learnt some lessons from that experience but refused, has taught us the futility of the pursuit of a path of vengeance and revenge.

Prof. Mills argued that since Rawlings was not a candidate in the elections, the human rights records to compare should be that of President Kufuor as PNDC secretary for Local government in January to August 1982 and President of the third government of the fourth republic from January 2001 to date, with that of his (Mills) record as Vice President in the NDC government of 1997 to 2001.

He distanced himself from being part of the PNDC system and that he did not feel any obligation to reconcile with any one from the PNDC era or to defend the human rights record.

"The present government has that obligation, if not to defend, at least to explain", he noted.

Touching on the economy, he described as unfortunate that the NPP government has fused the responsibilities of the Minister of Finance and that of the National Development Planning Commission (NDPC), thereby resulting in the poor state of Ghana's economy.

He said in ensuring NDC's vision of maintaining the constitutional position, it set up a National Strategic Planning Institute as a component part of the NDPC, dedicated to working out medium-to-long term planning and analyze for tomorrow the impact and consequences of events and decisions.

He stated that there were wide disparities in the country and that the policy that stressed equality of treatment, as the NPP government claims it is doing, would only go to perpetuate those inequalities and go against any philosophy of social democracy.

In order to create full employment, he said, their vision for the future was for what he called 'town' and 'gown' to sit down, discuss and agree on what the 'town' needs from the 'gown' so that the 'gown' could produce what the 'town' needed. "We have a vision of 'Water Fund' to subsidize water provision", he noted.

On education, he said the concept of full cost recovery whilst one is still a student was illogical, adding that cost sharing had to be grudgingly accepted as a matter of practical necessity with parents and not with students.

He stressed the need to look beyond GETFund and constantly seek innovative ways of adding to the resources available for funding education.

Prof. Atta Mills said his government would work to expand and improve upon access to good health care and encourage the private sector to build and manage new health care centers equipped with the most modern health care devices and equipment.

According to him, to restrict the benefit of health insurance to only members of the Mutual Health Insurance Schemes meant some members of society were contributing to the NHIS without enjoying any benefits under it, a situation he described as unconscionable.