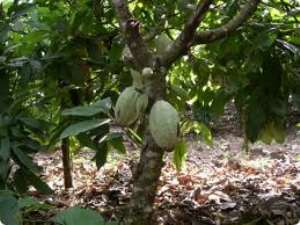 Ghana’s Cocoa Eco-Project has a major outcome of increasing carbon sequestration by minimizing the emission of harmful gases on cocoa farms into the atmosphere.

Carbon sequestration involves the long term storage of carbon dioxide to mitigate climate change – it has been proposed as a way to slow the atmospheric accumulation of greenhouse gases, which are released by burning fossil fuels.

Under the Cocoa Eco-Project, SNV Ghana is partnering the Kuapa Kokoo Farmers Union (KKFU) to create environmental awareness among cocoa farmers, especially on issues of land degradation and deforestation.

Helping the farmers to adapt to climate change is a major concern, says Frank Okyere, Project Manager at KKFU.

“Even this year the rainfall pattern is changing,” he observed. “Now for productivity to increase, we need rainfall and the cocoa plant needs a micro-climate, including trees, to minimize the pest infestation and everything”.

According to the World Bank, cocoa farming is one of the dominant land use activities in Ghana with an estimated cultivation area of over 1.6 million hectares.

Ghana is the second largest producer of cocoa in the world, but productivity is low, compared with Ivory Coast. Challenges in production are expected to be exacerbated by climate change.

Climate scientists at the Colombia-based International Centre for Tropical Agriculture (CIAT) have predicted the rising temperatures will lead to massive declines in cocoa production cocoa-growing areas in West Africa by 2030.

This puts at risk an estimated 800,000 farm households in Ghana that depend on the cocoa sector for their primary livelihood.

Increasing production demands expansion of areas under cultivation, with the resultant effect of converting forests to farming systems which leads to decline in carbon stocks.

The intervention of the Cocoa Eco Project is to limit the encroachment of cocoa plantations onto forest lands and conservation of biodiversity.

In the past two years, farmers have been supplied with 34,000 shade tree seedlings in addition to 120,000 cocoa seedlings.

Frank Okyere says the project is beneficial to the environment and the economic livelihood of farmers.

“It will help them increase their productivity, sell the trees because they are economic trees and in the wider sense, protect our environment by absorbing the carbon dioxide so that everybody will benefit,” he said.

A technical team at SNV Ghana is working with the International Institute of Tropical Agriculture (IITA) on climate mitigation activities in the country.

Charles Brefo-Nimo, Project Manager of the Cocoa Eco-Project, says there are arrangements to identify climate hot-spots in the country “so that they can use that to advise farmers as to areas that they need to take note of”.

There are also programmes to limit the level of degradation of forests in local communities, by using tools that “help us to identify cocoa and forest, such that if people are encroaching into a forest zone, that system will enable us to see and respond”.