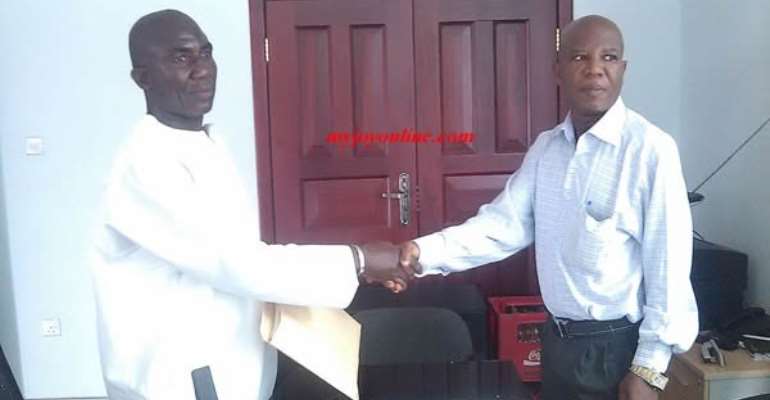 The polling station youth organiser of the NDC at Oyarifa in Accra was at the governing party's head office at Adabraka Tuesday September 8 - two days to the deadline for submission of nomination forms - to pick the forms but left empty-handed.

The 45-year-old told Joy News' Kwakye Afreh Nuamah he was at the party's office but was prevented from entering the building by a heavily built man who barked instructions to him to wait for the General Secretary of the NDC, Johnson Asiedu Nketia.

He said when the General Secretary arrived, he was allowed into the office but asked to wait.

After waiting for two hours, an emissary of Mr. Asiedu Nketia came to take his telephone number with the promise that he would be called.

Mr. Nketia was in a meeting, the messenger added.
Goerge Boateng picked the NDC's presidential nomination forms two weeks ago but Mr. Asiedu Nktetia said the persons who issued the forms were not authorised to do so.

General Mosquito, as the NDC General Secretary is fondly called, questioned the mental capacity of George Boateng, insisting the forms he was presented with were duplicates and, therefore, lacked authenticity.

By practice, he said, all presidential nomination forms are endorsed by the General Secretary or his assigns.

To the extent that George Boateng's forms were not endorsed by him, they were void, he explained.

He said if George Boateng was minded, he should go through the normal procedure and pick the forms, with a caveat that he would be considered to run for the presidential candidacy of NDC if he met the required criteria.

Demonstrating resilience, Goerge Boateng Monday submitted himself to psychiatric examination at the Accra Psychiatric Hospital ostensibly to prove that he is mentally sound to contest for the flagbearership of the NDC.

The results of that evaluation are not yet ready but he believed he could pick up the nomination forms and start the processes of collating the necessary endorsements.

It does, however, appear the NDC is not prepared to allow George Boateng, whom the leaders perceive as embarrassing the party, to join the race for the flagbearership.

Some comments made by Mr. Boateng since his declaration have been at best comical, and at worse, insane.

He told Kwakye Afreh he believes the party is deliberately frustrating him.

He is contemplating going to court over the matter.