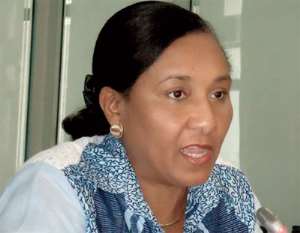 The Deputy Minister of Finance, Mrs. Mona Quartey has proposed to the local private sector to form a consortium to undertake projects that require huge financial and technical resources.

She also urged them to adequately prepare and be innovative in finding ways to partner government in Public Private Partnership (PPP).

Mrs. Quartey made the proposal at a days’ forum on PPPs organized by the Ministry through its Public Investment Division (MoF-PID) for the local Private Partner.

The forum which took place in Accra and had the theme, “Leveraging PPPs for National Development: The Role of the Local Private Partner”.

The Forum was designed for the Ghana Chamber of Commerce and Industry (GCCI), is the second in a series of meetings to be organize for the local private sector. The maiden meeting was organized for members of the Association of Ghana Industries (AGI).

Mrs. Quartey tasked the local private sector to position itself so it can partner government to provide critical infrastructure and services needed in the country.

According to the Deputy Minister, the PPP programme is central to government’s development agenda since it helps in accelerating the development and the provision of required infrastructure.

The PPP also serves as a vehicle to promote the Ghanaian private sector and in the overall development of the country.

The forum is part of government’s continuing efforts to promote the understanding of the PPP concept and galvanise support in the quests to find new ways to provide better public infrastructure and services through PPP.

Government, which has over the years been grappling with the provision of adequate and reliable infrastructure to facilitate socio-economic development of the country, therefore, approved the National Policy on PPP’s in 2011 to encourage private sector participation in the timely provision of services.

“The Ghanaian private sector is critical to the success of the PPP programme,” Mrs Quartey said.

She explained that a PPP principally enables government to provide better infrastructure and services through the use of private sector financial, human and technical resources, thereby freeing government resources for other equally important uses.

She said it has been established that a minimum of 1.5 billion dollars is required per annum over the next decade to enable Ghana make up for its infrastructural deficit.

She also announced that a number of Ministries, Departments and Agencies (MDA’s) and MMDAs have been selected and currently developing projects that could be procured through the PPP arrangements.

She said some of the identified projects include the improvement and construction of the Accra-Takoradi Highway into a dual carriageway, the Boankra Inland Port and Eastern Railway Line Project, the Accra-Kumasi Road project and the Takoradi Port Expansion Projects.

Mrs Magdalene Apenteng, Director of Ministry of Finance’s Public Investment Division (MoF-PID), said the forum forms part of series of meetings planned to engage the private sector to educate them on the PPP and encourage them to form partnerships and help develop the country.

She said Brazil and India are some of the countries which have attained so much development under similar PPPs.

She therefore urged participants at the forum to take advantage of the partnerships to expand their businesses as a means of creating more jobs for the people.

Mr. Wilson Atta Krofah, Immediate Past President of GCCI, said the engagement was providing the platform to dialogue on the readiness of the local private sector to engage government for investment purposes.

“The PPP serves as an avenue for accelerated infrastructure delivery, a means for risk sharing between the government and private sector partners, technology and capacity development and a means for increasing international and domestic investment”.

Mr Atta Krofah said since government alone could not provide the entire infrastructure needed in the country, involving the private sector in Ghana would absolutely be critical to scale up investment in government projects.