I will secure one touch victory - Mahama 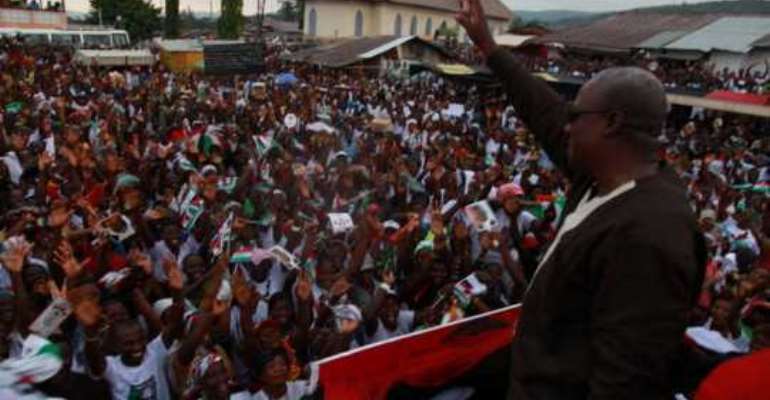 Accra, Sept.8, GNA - President John Dramani Mahama has assured the National Democratic Congress (NDC) that if the party gave him another mandate, he would secure a 'one-touch victory' for the party.

'I look forward to four more years in the Flagstaff House,' he stated.

'My story in office has been one of overcoming challenges, but also one of hope.'

President Mahama made the remarks shortly after he submitted his nomination forms to the NDC Headquarters at Adabraka in Accra to contest the party's upcoming presidential primary.

He stated that in spite of the numerous challenges that confronted his government since his assumption of office, he had been able to deliver a lot that Ghanaians ought to be proud of.

'Our record in office is impressive, and all of us can be proud about it,' President Mahama told hundreds of NDC supporters at the part headquarters.

Giving the sequence of events, President Mahama stated with particular reference to the election petition created uncertainty, and he only had two years to govern.

He said nevertheless his government had been able to roll out the Community Day Senior High Schools (SHS), adding that 120 SHS were under construction as part of the progressively free education policy.

He said Ghanaians should envisage 173 schools by the end of 2016.

Since independence the country can boast of only 608 senior high schools.

President Mahama also stated that with the new schools, many more children could continue to SHS without having their education truncated at the basic level.

He disclosed that another University would be established in the Eastern Region, following the successes of the two in the Volta and Brong Ahafo regions.

He also acknowledged the significant expansion in the area of healthcare across the country.

He cited the construction of a Military Hospital in Kumasi, and other polyclinics and hospitals across the country to be fitted with modern diagnostic equipment, such as Magnetic Resonance Imaging (MRIs).

President Mahama further stated that the on-going expansion of water projects would continue to ensure that about 85 percent coverage was attained nationwide by the end of next year.

He said with two successful reviews of the IMF extended credit facility following the country's home grown policy, it was clear that the economy was turning around.

He said this was being achieved because he took 'quite tough decisions,' adding that the country would maintain fiscal discipline even during the election year.

'We will accelerate the economic growth of this country and consolidate the transition of Ghana into middle status within the next five years,' President Mahama assured Ghanaians.

President Mahama also maintained that his government would not give room to corrupt people to operate.

He said persons who engaged in corruption under his administration were being dealt with according to the laws.

He said a Committee would be set up to implement the National Anti-corruption Action Plan.

He promised that his government would continue to promote tolerance, freedom and justice.

President Mahama also called for fair play and decency in the party's primaries across the country.

He ended his address on a high hope: 'With Christ in our vessel we shall smile at the storms…and by the grace of the Almighty God I look forward to four more years in the Flagstaff House.'