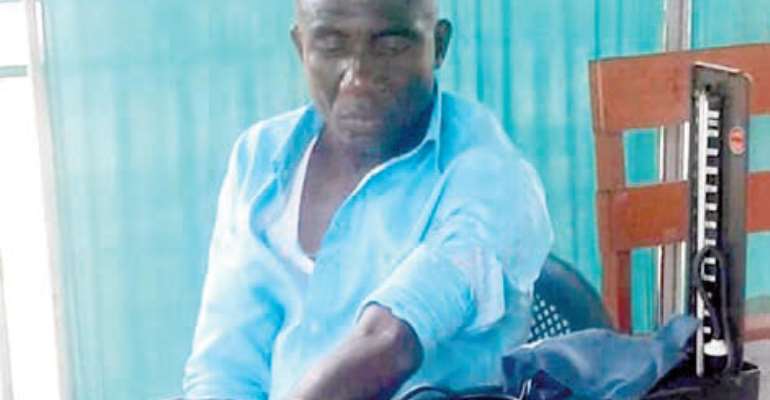 His mission there was simple - diffuse the impression being created by some national executives of the NDC, especially its General Secretary, Johnson Asiedu Nketia, that he is not mentally stable.

This was after Asiedu Nketia popularly known  as General Mosquito, had denied media reports that George, a polling station youth organizer of the NDC at Oyarifa, where Asiedu Nketia lives in the Madina constituency, had picked nomination forms to contest the presidential primary of the governing party. Mr George Boateng claimed that President Mahama had failed to deliver on the several promises he made to Ghanaians ahead of the 2012 elections.

Asiedu Nketia claims the nomination forms were not the original ones but rather draft copies that were sold out to George when he went to purchase them at the party headquarters.

An accountant at the NDC's Adabraka headquarters who sold the forms to him and another administrator have since been relieved of their duties as a result of the confusion.

'I have information that Asiedu Nketia and the rest want to disqualify me on the basis that I'm mentally sick and I will never allow that to happen. So to ensure that they don't use that against me, I have decided to go for a test at the Pantang Hospital by 10 am sharp today. The media can follow me and cover the event as I want the public to be witnesses. I'm confident that the doctor after examining me, will give me the clearance. After that is done, I'll move straight to the headquarters for another form,' George said earlier before checking in at the psychiatric facility.

The 45-year-old shipping agent stormed the hospital after midday yesterday and was taken through the process of examination after which he was discharged and asked to go.

But for the presence of the media, he would have been issued a copy of the report he so much yearned for to prove his detractors wrong.

George told DAILY GUIDE that he was asked to go and that he would be called on telephone to come for his report later – hopefully today since the report was supposed to be a confidential document and not meant for the media.

He was supposed to pick a new form yesterday but could not due to delays he went through at the Pantang hospital.

That notwithstanding, he has indicated his preparedness to storm the NDC headquarters by midday today to pick the forms (the original as said by the NDC General Secretary) at no additional cost since he duly paid for the initial ones (the supposed draft copies).

He has therefore asked the NDC General Secretary to stay at the headquarters to issue him with the new nomination forms and not try to play any hide-and-seek with him in an attempt  to frustrate him, as he had vowed not to let Mahama go unopposed.